'The parks, reservoirs, rooftops and gardens of London - here defined as the area within 20 miles of St Paul’s Cathedral - have a surprisingly rich avifauna, including a healthy population of one of Britain’s rarest breeders, the Black Redstart.' - Bloomsbury Publishing

Competition: Win a copy of Birds of London by Andrew Self 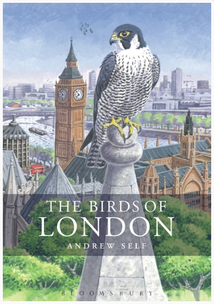 The item in question...
This competition is now closed, thank you for entering. The winners will be chosen at random on Monday 7th April and will be notified by email.

Birding24/7 and Bloomsbury Publishing have combined to give one lucky reader the chance to ﻿win Andrew Self's new book - Birds of London. Recently released with a RRP of £50.00, this book is a must-read for fans of ornithology, historical sites and bustling city life.

The great parks, reservoirs, rooftops and gardens of one of the world's leading cities have a surprisingly rich avifauna, including a healthy population of one of Britain’s rarest breeders, the Black Redstart. The region also has a remarkable list of rarities, in recent years Canary Wharf has proven to be a magnet for vagrants, while one of the very few British records of Tengmalm’s Owl hails from Plaistow, an unfortunate bird stoned to death by local street urchins in 1877.

Some species, like the Peregrine Falcon, Black-headed Gull and Ring-necked Parakeet, have seen their fortunes soar over recent decades; others, such as House Sparrow, have suffered a population collapse. While as recently as a century ago, the London area had breeding populations of birds such as Wryneck and Red-backed Shrike, which are now nationally extinct. The status, distribution and history of every species on the regional list is discussed in rich detail in this book, the first comprehensive avifauna for the London area ever published.

The County Avifauna series provides detailed information on the range and status of bird species at county level. Areas covered in the series so far include Norfolk, Suffolk, Dorset, the Shetland Islands, Leicestershire and Rutland, Essex and
Gwent. Each title covers all species on the county list, with a breakdown of rarity records, and there are introductory sections describing the area’s ecology, its ornithological history, as well as a review of the best sites to visit.

www.bloomsbury.com
*This competition is open to UK residents only. Our Terms & Conditions apply, and your email address will be shared with Bloomsbury Publishing for marketing purposes.
SIMILAR ARTICLES TO READ