Which penguin species will be most affected by climate change?

'Getting to field sites involved either a hair-raising drive over very soggy peatlands, or sailing to nearby islands and unloading equipment in big swells. When the wind was up, holding onto feather samples and equipment was hard, partly because they were blowing away, but also because you were losing feeling in your fingers from the wind-chill. Camping next to colony of 3000 penguins was noisy and had a fantastic ammonia smell.'
Jonathan Handley, a field scientist working with BirdLife Partner Falklands Conservation 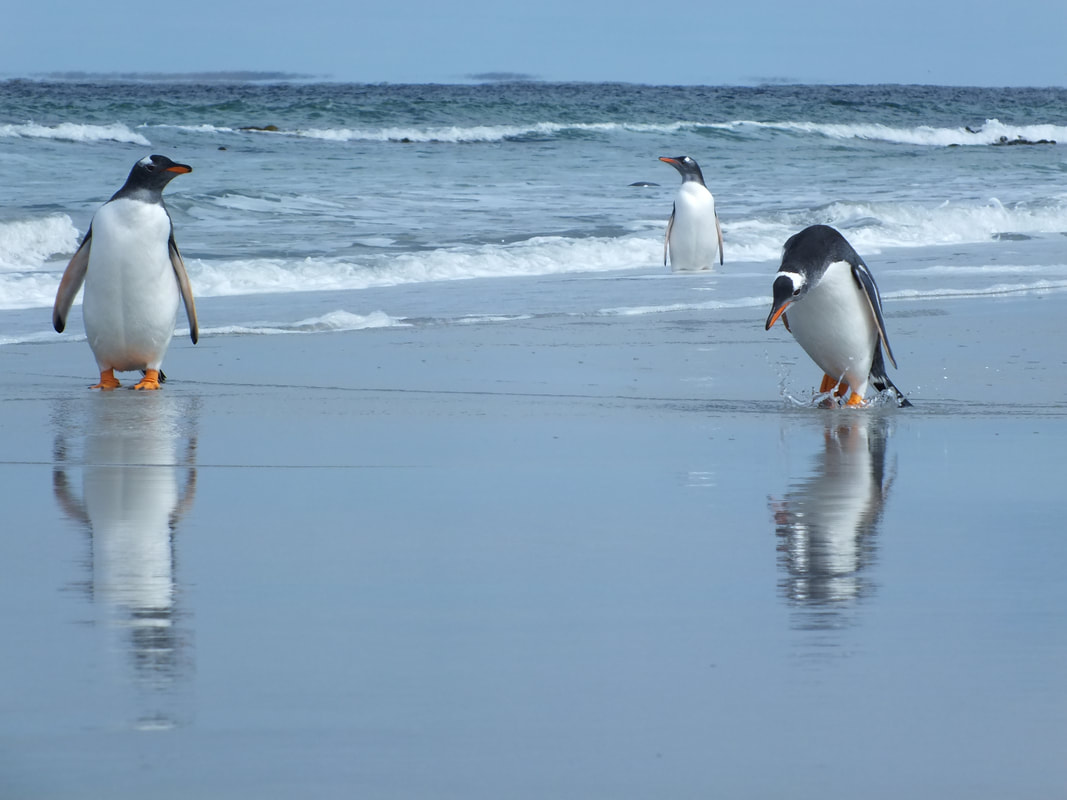 As ice caps melt and sea levels rise, the survival of penguins will depend on their ability to adapt and relocate to new habitats. Now, a new genetic study has revealed that some species may be better at adjusting than others...

A feather is blown into the air by an icy blast of 50mph wind and carried off towards the horizon. The scientist curses, clutching with frozen fingers to no avail. That was no ordinary feather – that was destined to be a DNA sample in a ground-breaking study predicting how penguins will cope with one of the most pressing threats of our time: climate change.
​
It helps to be flexible in a world that’s constantly changing. Penguins in particular are set to be on the front line of climate change. As fish supplies shift and areas of suitable habitat disappear, will they be able to adapt? That depends on their ability to disperse. If a penguin is able to travel long distances, it can relocate to new habitats. It can also meet and interbreed with different colonies, maintaining a high genetic diversity – the ultimate insurance against changing conditions.

This paper, published in 2018 Molecular Ecology, studied five Southern Ocean penguin species: Emperor, King, Adélie, Chinstrap and Gentoo. By looking at their genes, scientists planned to estimate the dispersal ability of each species. If there seemed to be a good mix of genes across the whole species’ range, this would mean that penguins were dispersing and interbreeding well. But if different colonies seemed genetically distinct from each other, this would be evidence that they were more self-contained and seldom came into contact with each other.

Gathering samples for DNA analysis wasn’t easy. Jonathan Handley, a field scientist working with BirdLife Partner Falklands Conservation, a key contributor to the study, recounts the experience: “Getting to field sites involved either a hair-raising drive over very soggy peatlands, or sailing to nearby islands and unloading equipment in big swells. When the wind was up, holding onto feather samples and equipment was hard, partly because they were blowing away, but also because you were losing feeling in your fingers from the wind-chill. Camping next to colony of 3000 penguins was noisy and had a fantastic ammonia smell.”

However, being among the penguins was also highly rewarding: “Each penguin has its own unique personality. Of the two species we investigated, the King Penguins tend to be quite dignified, slowly marching their way along the beaches, while the Gentoo Penguins are typically quite shy and a little nervous - although they do make a nasty hissing sound when Brown Skuas fly nearby. You can almost hear a Mexican wave effect as they fly over the colony.”

Once all the hard-won samples had been collected, the results were clear. The Emperor, King, Adélie and Chinstrap penguins all showed good dispersal ability – but the Gentoo penguin did not.

But what makes one penguin species better at dispersing than another? It all seems to come down to how far it swims when searching for food. The Chinstrap Penguin, for example, can travel an astonishing 3,900km away from its colony outside of the breeding period. While away, it is more likely to come into contact with individuals from other colonies or even relocate to a new breeding site altogether. Juvenile King Penguins take this to the extreme – they have been spotted at colonies up to 5,600 km from the one of their birth.

The Gentoo penguin, on the other hand, lives a relatively sheltered life. Even outside the breeding period, when adults no longer need to hurry back to feed hungry chicks, they are rarely seen more than 50km offshore. This cautious lifestyle could well be the reason there seems to be little genetic mixing between major colonies. So how does this factor in to how we protect them?

“Dispersal ability and genetic differentiation should be factored into any action plans for these species”, says Dr Gemma Clucas, a lead author of the paper. “Because Gentoo Penguins seem to have such a low rate of dispersal between island archipelagos, each of the archipelagos we looked at harboured unique genetic diversity that would be lost for good if the population were to go extinct. This could be bad news for the species in the long term, because genetic diversity is important for adapting to changing conditions. This means that all of the archipelagos that are home to Gentoo Penguins should be given a high degree of protection.”

The other four species aren’t completely in the clear, either. "Unfortunately, the amazing dispersal ability of Emperor, King, Chinstrap and Adélie penguins doesn't mean they are immune to the effects of climate change,” says Dr Jane Younger, co-author of the paper. “Emperor penguins rely on sea ice for their breeding and will be particularly vulnerable in the years to come, and all of these species compete with commercial fisheries for prey. Dispersal may help them adjust to climate change, but we still need to protect their feeding and nesting grounds to give them the best chance at survival."

Unfortunately half of the world’s penguin species are sliding towards extinction. BirdLife are running a programme to which you can make a donation towards in order to help them reverse this slippery slope.