'It has been a wonderful experience, re-acquainting myself with a whole host of pioneering papers, such as Peter Scott’s original formula for identifying Bewick’s swans by their bill patterns. Incredible that the study continues and this winter celebrates its 50th anniversary!' - Dr Eileen Rees, Editor of Wildfowl

The WWT’s entire history of scientific publishing is now available online to all waterbird and conservation enthusiasts, dating back to 1947 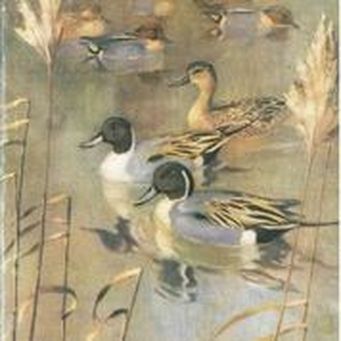 Incredible life's work - the journal dates back to 1947
Anyone interested in waterbirds and conservation now has free access to the entire catalogue of papers published by WWT in its scientific journal, Wildfowl.

The new online resource is the culmination of months of hard graft by volunteers to digitise printed copies of Wildfowl dating back to 1947, when it first appeared as the Annual Report of the Severn Wildfowl Trust.

WWT hopes that budding researchers and waterbird enthusiasts will be encouraged by opening the vaults on some of the most significant moments in ornithological history. Wildfowl online is fully searchable and east to use, giving the work of contributing scientists a far greater reach and influence.

Dr Eileen Rees, Editor of Wildfowl, commented: “It has been a wonderful experience, re-acquainting myself with a whole host of pioneering papers, such as Peter Scott’s original formula for identifying Bewick’s swans by their bill patterns. Incredible that the study continues and this winter celebrates its 50th anniversary!

“There are so many scientists who have furthered our understanding through publishing in Wildfowl over the years but, for me, the most poignant are those that managed to get information out from behind the Iron Curtain during the Cold War. The birds we study range over vast swathes of Eastern Europe and Russia. It is easy to forget how that restricted our understanding of them in the early-mid 20th century, and the huge excitement as opportunities to travel in the region opened up.”

The content of Wildfowl over the last six decades reflects WWT’s pioneering approach to conservation, publishing papers on wetland habitats and aviculture as well as ornithology. Its specialisation gave scientists space to publish studies that would otherwise have been marginalised and the papers published in Wildfowl are still relevant today:

Here are a few tasters of the wealth of information on waterbirds and their habitats described in Wildfowl, which can be found in the journal’s archive


Early editions of the journal also present fascinating insights into the history of WWT, including the development of its research and conservation work, and the establishment of the captive breeding programme. A link to the archive is also provided on the Wildfowl page on the WWT website.