"Jane Reid has made significant contributions to the BTO at all levels. She is an active bird ringer and trainer in northeast Scotland and, by building strong links between academics and volunteers, has particularly encouraged and inspired people of all ages to become involved with ornithology." - Dr Andy Clements, BTO Director

The Marsh Award for Ornithology presented to Dr Jane Reid 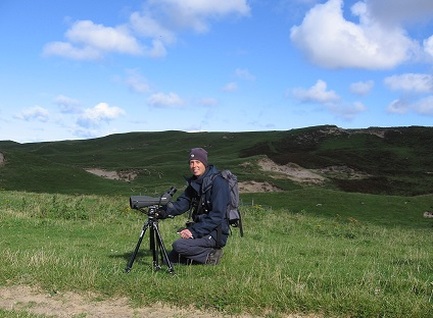 Dr Reid was nominated for the Marsh Award for Ornithology by its previous three winners, Dr Jenny Gill, Dr Ian Hartley and Prof Jeremy Wilson, commending Jane as 'an outstanding ornithologist who has contributed hugely to the field through her extremely high quality research, her dynamic approach to addressing important scientific issues and her deep commitment to developing young researchers and engaging a wide range of audiences'.

The Marsh Trust runs a portfolio of awards with a number of internationally and nationally recognised organisations. Recipients of Marsh Awards range from scientists working in conservation biology and ecology to authors and sculptors from the arts world, and those who give their time unselfishly to work with the young, the elderly, people with mental health issues and for our heritage.

Jane became a Research Fellow at the University of Aberdeen in 2006, where she has contributed greatly to the growth of one of the most dynamic ecological research groups in the UK, and to training a series of excellent young ornithologists.  Jane’s research integrates novel and innovative behavioural ecology with important issues in conservation, population and evolutionary ecology. She uses long-term field studies of wild bird populations, developed in collaboration with both professional and amateur ornithologists, to understand the genetic and ecological forces that influence how populations respond to environmental change. Her studies of Red-billed Choughs on Islay, for instance, have seen her working closely with local enthusiasts and farmers, academic colleagues and conservation agencies to understand the demographic causes of population change and help focus conservation interventions where they can be most effective. She has used long-term studies of Starlings on Fair Isle, Song Sparrows in British Columbia, Ring Ouzels in the Scottish Highlands, and Shags in eastern Scotland to provide new insights into the ecological and evolutionary dynamics of bird populations.

Jane served as a member of the BTO’s Ringing Committee and BTO Council (2004-10) and as a supportive member of the editorial board of Ringing and Migration (2000-08) and is a Director of the Fair Isle Bird Observatory Trust (2005-2015).

BTO Director, Dr Andy Clements said: "Jane Reid has made significant contributions to the BTO at all levels. She is an active bird ringer and trainer in northeast Scotland and, by building strong links between academics and volunteers, has particularly encouraged and inspired people of all ages to become involved with ornithology."

Jane Reid said: "It’s a real privilege to receive the Marsh Award. The BTO’s commitment to integrating the work of amateur and professional ornithologists is critically important. It’s a goal that I wholeheartedly support, and to which I am delighted to have contributed."

The Marsh Award for Ornithology is made to an ornithologist who is making a significant contribution to the field. Amongst other things, the selection panel considers the significance of the research undertaken so far, contributions to training and capacity-building within ornithology, alignment with the BTO’s mission and engagement with the wider ornithological community.