Stone-curlews, one of the UK's rarest breeding birds, are still vulnerable despite decades of recovery 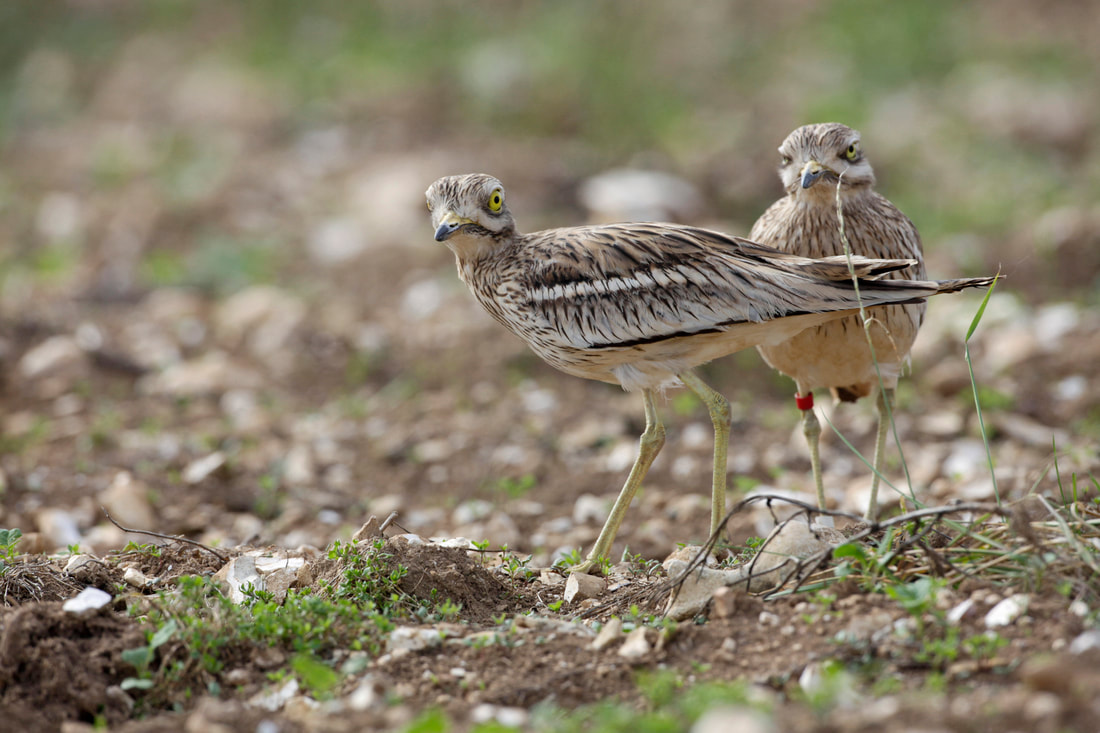 Stone-curlews by Andy Hay (rspb-images.com)
The RSPB has warned that the East Anglian population of one of the UK’s rarest breeding birds, the stone-curlew, remains vulnerable despite decades of recovery.

Numbers of the rare migratory wading bird nesting in the East have fallen in recent years after reaching a peak of around 290 breeding pairs in 2012.

Last year, possibly as few as 202 pairs are thought to have nested in the East of England. The majority – around 165 pairs – in the Brecks, with a small number of birds breeding in other parts of the region, including the Suffolk Coast close to RSPB Minsmere nature reserve.

​Tim Cowan, RSPB Eastern England stone-curlew project manager, said: “The fall in breeding numbers of stone-curlew in the last six years is a troubling trend. To lose up to 30% of the breeding pairs is a major setback to decades-long conservation efforts. The weather played a significant part in 2013, when a late cold snap sadly wiped out a lot of birds that had arrived back early from migration, but more worrying is the failure of the population to recover from that bad winter. The fact that a one-off weather event like this can leave the population still struggling to bounce back years later highlights the precarious situation the UK’s stone-curlews are still in.”

Each spring, stone-curlews, which spend the winter in North Africa and the Mediterranean basin, return to UK to breed. The dry sandy soils of the Brecks and Suffolk Coast provide the perfect conditions, because unlike familiar gardens birds like blue tits and robins, stone curlews nest on the ground.

The decline since 2012 follows a period of nearly 30 years during which stone-curlew numbers increased from a historic low in 1985, thanks to the collaborative efforts of farmers, gamekeepers, landowners, volunteers and conservation organisations.
Farmers continue to play a crucial part in stone-curlew conservation in the Brecks, with two-thirds of the breeding pairs choosing to nest on arable farmland, and agri-environment schemes have been key to supporting their efforts.

Tim Cowan: “Farmers in the Brecks have been on the front line of stone-curlew conservation for years – protecting nests, and creating safe fallow plots for birds to nest on. As ground-nesting birds stone-curlews are extremely vulnerable to farming operations if they nest in amongst crops, so creating areas of bare ground gives them somewhere safe to lay their eggs and hatch and rear their chicks.

“Last year, 34 per cent of the stone curlews nesting on farmland monitored by RSPB in the Brecks were on these specially created plots, and the vast majority of these were created with the help of agri-environment agreements – schemes that pay farmers to look after the environment and wildlife in the countryside.”

This month, farmers involved in stone-curlew conservation in the Brecks and on the Suffolk Coast are preparing for the arrival of one of our rarest birds, the stone-curlew, by creating areas of bare ground within their crops for the birds to nest on.

Pat Atkin, owner of farm business J. Peacock and Sons in Hockwold, Norfolk, said: “We have been involved in stone-curlew conservation on our farm for more than 30 years. Our current agri-environment agreement includes creating two nesting plots each year, and we normally get three or four pairs of stone-curlews nesting on the farm each year.

“It’s great to know that we are making a difference for these birds and we’re in the process of putting together an application for a new agreement as part of the successor to our current agri-environment scheme. The money these provide means we can leave land fallow to help stone-curlews without jeopardising the viability of our business.”
​
WIN - enter our new photography competition for UK birders here