'This is a real honour for the WWT conservation breeding team. The plight of the Spoon-billed Sandpiper has pulled together conservationists from all over the world and we’re very lucky to work with the support of a great many experts in the field.' - Nigel Jarrett, WWT’s Head of Conservation Breeding 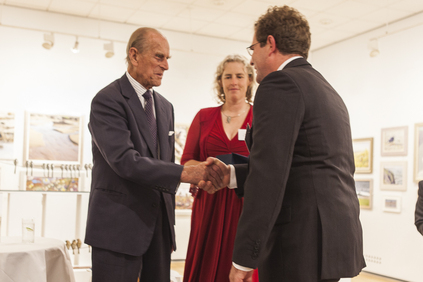 Nigel Jarrett receiving the award © Nick Caro/BTO
At a ceremony in London last week, the Wildfowl and Wetlands Trust (WWT) Conservation Breeding team were awarded the Marsh Award for 'Innovative Ornithology' - recognition for their exceptional work in helping to save one of the world's rarest birds from extinction - Spoon-billed Sandpiper.

The project to save the Spoon-billed Sandpiper has indeed used some highly innovative ornithological techniques. In particular, the manipulation of breeding attempts to increase productivity of the 100 breeding pairs remaining in Chukotka, Russia. This relies on sound ornithological knowledge of breeding strategies and behaviour, something the WWT team have in spades.

Two elements of the breeding biology of Spoon-billed Sandpiper are the highlight of innovative methods in this ground-breaking project. A small flock of adult Spoon-billed Sandpipers is under specialist care in captivity at the WWT HQ in Slimbridge. These birds were imported into the UK from Russia in 2011 and 2012, and it is hoped that they will breed in captivity as the flock becomes established. This spring birds were singing and displaying in the aviaries. The achievement to establish a potential captive breeding population of a small Calidrid shorebird is highly innovative. This flock is a precious insurance policy, a last resort in case the species does become extinct in the wild, and buys time to tackle the multitude of other threats faced by the wild population.

The second innovation is ‘head-starting’ where eggs are taken and hatched in Russia, and then the chicks are hand-reared to improve productivity to wild nests. Once old enough, the hand-reared birds are returned to the wild where it has been hoped that they resume normal migratory behaviour and eventually return to Russia to breed. In May 2014 a returning ‘head-started’ individual from 2012 was seen and photographed in Taiwan on its way back north to the breeding grounds and later bred successfully, raising one chick to fledging. This demonstrates the real value and success of the ‘head-starting’ strategy.

The award was presented by The Duke of Edinburgh at a ceremony hosted by the British Trust for Ornithology (BTO) and the Society of Wildlife Artists (SWLA) at the Mall Gallery in London.

Nigel Jarrett, WWT’s Head of Conservation Breeding said: “This is a real honour for the WWT conservation breeding team. The plight of the Spoon-billed Sandpiper has pulled together conservationists from all over the world and we’re very lucky to work with the support of a great many experts in the field. There’s a long way to go before the Spoon-billed Sandpiper has a secure future in the wild and some of the biggest challenges still lie ahead, but it’s wonderful to feel that we’ve played a part in moving towards that goal.”

Andy Clements, BTO Director said: "The Marsh Awards for Ornithology enable BTO to recognise the excellent work of ornithologists at a variety of scales, all of whom are partners with BTO in ensuring science contributes to conservation. The innovative science demonstrated as part of assisting the recovery of the Spoon-billed Sandpiper population is an outstanding illustration of what can be achieved. The WWT team are thoroughly deserving winners of this Award."