'Two important migration routes, the northern border with the Alps and the broad Rhine valley which are used by many species for traversing the Alps, meet at Lake Constance. When the conditions for overflying the Alps are unsuitable the migrating birds concentrate locally and large numbers of resting birds can be observed' - James Hamilton, Ed 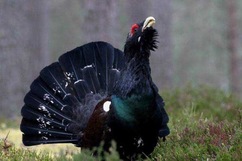 Setting off at 4am from Hertfordshire for a five day birding adventure in Europe might not be everyone's cup of tea. But for anyone who enjoys their birds, a long drive, jaw-dropping scenery and fantastic culture... this experience is simply well worth it.

Avoiding tolls where possible, the drive through France, Belgium, Luxembourg and France again to finally reach the Black Forest at the edge of South West Germany is mostly, quite delightful. Your efforts will be well rewarded once you discover that the state of Baden-Wuerttemberg is home to a unique selection of bird species which are more usually found in the warmer climes of the Mediterranean. For example, the Bee-Eater and Hoopoe breed on the Kaiserstuhl, the Alpine Swift is to be found in nearby Freiburg and the Purple Heron in Waghaeusel. At the same time some species, the core of whose distribution is in Central Europe, also have significant populations in the state. These include Red Kite, Middle Spotted Woodpecker, Collared Flycatcher, aswell as Citril Finch - a representative of the alpine fauna - which has an isolated population in the Black Forest.

Despite human interference the Black Forest is still one of the less fragmented woodland areas in Germany. It takes its name from the extensive, near-natural, dark mixed woods with the characteristic Silver Fir. This often primeval woodland is to be found in the core area of the National Park. They are home to numerous animal species such as Roe and Red Deer, Wild Boar and the very occasional Lynx; but also to birds such as the Raven, Three-toed Woodpecker, Pygmy Owl and the Capercaillie - the symbolic bird of the Black Forest.

Birding Lake Constance (Bodensee) on the borders of Germany, Austria and Switzerland.

Lake Constance is the largest German inland water with a surface area of 570 km². Its maximum length is 63 km and it is 14 km wide at its broadest point. For birdwatching it is one of the most productive and varied regions in the whole of central Europe with 150 breeding bird species and over 410 confirmed species sightings. The proximity to the Alps and the sheer abundance of bird life add to the region’s attractions.

Lake Constance is the most important central European rest, moult and overwintering area for many water birds. The Untersee part of the lake (which spreads out from the river Rhine to the waters of the Gnadensee, Zeller See, and Untersee) is rich in nutrition and attracts enormous concentrations of birds. The make-up of these water bird gatherings varies from season to season. In September they are characterised by late breeding species such as Great Crested and Black-necked Grebe, Tufted Duck and Mute Swan as well as breeding or visiting species in moult like the Red-crested Pochard. Later in November large numbers of diving ducks such as Tufted Duck, Pochard, Goldeneye, Teal, Gadwall, and Whooper Swan and Cormorants can be observed. Up to 200,000 water birds gather on Lake Constance at this time, many of which fed primarily on the Zebra Mussel. From January onwards the mussel eaters still dominate but the overwintering populations of divers, sea ducks and goosanders reach their peak. If the water level of the lake falls under 300 cm, mud-flats are exposed all around the shoreline providing good conditions for waders in transit.

The Vorarlberg Rhine Delta is the top birding area at any time of year and the Wollmatinger Ried should also not be neglected. The so-called diver stretch is very interesting in winter. Mettnau, Eriskircher Ried, and the Radolfzell und Stockach Aach estuaries can also be included in the programme. In spring and summer the Hohentwiel Vulkanberg is worth visiting. The Mindelsee is well worth a detour in autumn for its Ferruginous Ducks (with a 99.9 % sighting chance!). A five day tour in the Lake Constance area is time enough to experience a wide-ranging insight into the area’s bird life. It is advisable to take your passport with you if you plan to cross the border into Austria or Switzerland where motorway tolls must be paid (vignette). All areas described are accessible by main road.

Two important migration routes, the northern border with the Alps and the broad Rhine valley which are used by many species for traversing the Alps, meet at Lake Constance. When the conditions for overflying the Alps are unsuitable the migrating birds concentrate locally and large numbers of resting birds can be observed. This constellation is particularly relevant in the Rhine Delta where, as a result, many rare species are recorded annually.