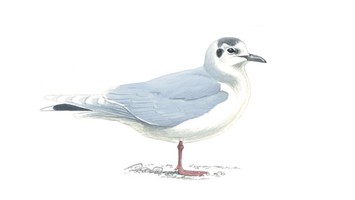 Little Gull, Image: RSPB.org.uk
We're taking a closer look at a few 'choice' birds over the next few months, and first up - we've chosen the Little Gull (Hydrocoloeus minutus) for some Birding24/7 VIB treatment.

A little more detail for you on the world’s smallest gull species... the birds typically measure between 25-27cm long with a wingspan of 75-80cm. Their usual lifespan is not known, but the oldest recorded bird was almost eleven years old, incredible given their size and the realities of survival. The species primarily use UK waters on their migration during spring and autumn, when favoured coastal locations can support large numbers of birds.

The European population of Little Gulls is estimated to be anywhere between 12-25,000 pairs and has a really scattered distribution as a breeding bird - mostly across Holland, Scandinavia, the Baltic states and east to Siberia, usually nesting in marshes and river valleys. It is also a breeding bird in the Great Lakes of North America.

Outside of the breeding season, Little Gulls appear to be widely distributed in European coastal waters, including the Mediterranean, Black and Caspian Seas - although limited information is available about their non-breeding distribution.

Little Gulls generally return to their breeding sites from late April to late May and depart from late July onwards. On migration, the species will be viewable at sea, along shores, on reservoirs, lakes, mouths of rivers and especially at stream and sewage outlets. Large numbers can be seen off North Sea coasts following storms during October and November. Some birds will of course winter in UK coastal waters, with the Irish Sea and North Sea hosting the majority of birds during their stay along the coast on sandy and muddy beaches.

In late summer early autumn, birders visiting Hornsea Mere in east Yorkshire (Little Gull mecca) can view hundreds, if not thousands of Little Gulls through a good quality pair of binoculars or scope, with flocks congregating together. 21,500 birds were recorded in September 2007. Numbers of the species in UK coastal waters appear to be increasing, perhaps associated with a westward shift in their breeding range and migration route.

Little Gulls catch their food on or just below the water surface. The species is mainly insectivorous when breeding, taking dragonflies, beetles, midges, mayflies and stoneflies to feed. On migration, their diet is the same as during the breeding season (consisting mainly of insects), although during the winter the species switches to a diet of small fish and aquatic and invertebrates like zooplankton. When viewing observing them you will notice how they will fly low over the water and then surface-dip or briefly plunge-dive into the water.

Keep an eye out for more in our 'in focus' bird series soon.
SIMILAR ARTICLES YOU WILL APPRECIATE: