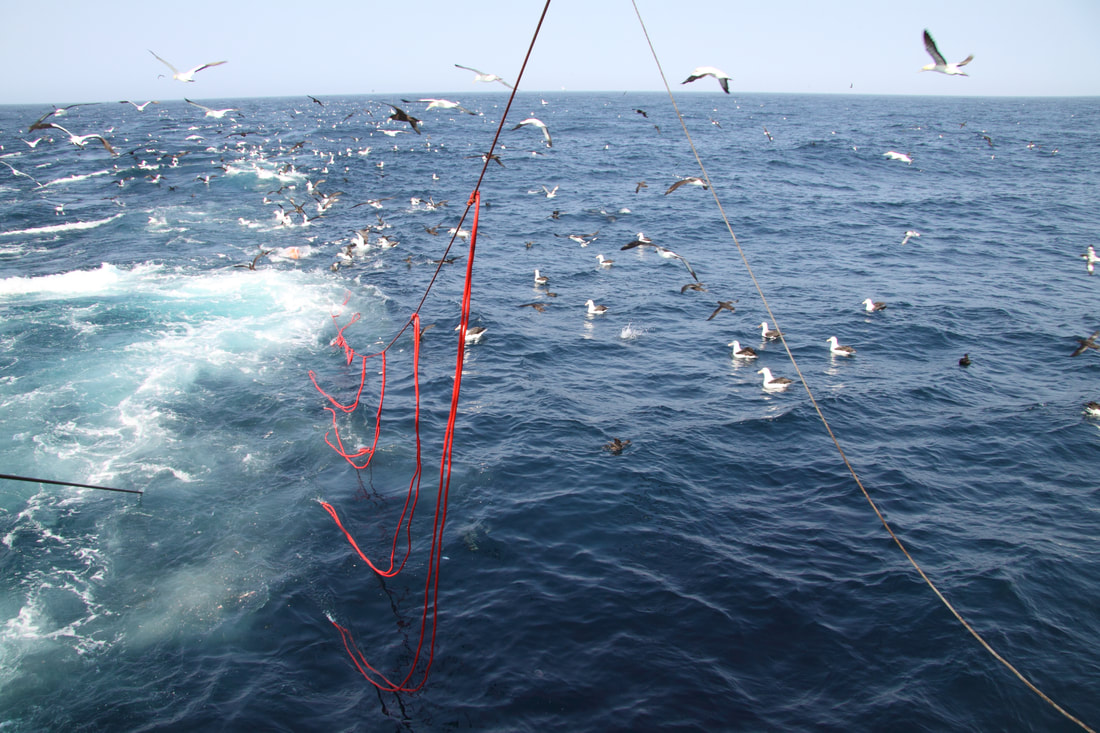 Bird-scaring lines in Namibia (c) John Paterson
The Namibian Albatross Task Force is celebrating a major conservation success story after a decade of work with the country’s fishing industry and fisheries managers. A new paper published in the journal Biological Conservation shows that seabird deaths in the Namibian demersal longline fishery have been reduced by 98% thanks to effective government regulation and dedicated grassroots engagement with the industry.

Bycatch – the capture of non-target species in fisheries – remains one of the biggest threats to seabirds, especially albatrosses, some of the most striking but most threatened birds globally. The RSPB and BirdLife International established the ‘Albatross Task Force’ (ATF) in South America and southern Africa to engage directly with the fishing industry and demonstrate the simple measures that can prevent birds being caught on longline fishing hooks or killed by collisions with the thick steel cables that haul trawl nets through the water.

In Namibia, one of the first jobs of the Task Force was to establish the scale of seabird bycatch in the riskiest fisheries. The results were rather shocking. Namibia’s hake trawl and longline fisheries were found to be among the world’s deadliest for seabirds: estimated at 30,000 birds killed each year, including threatened species like the Atlantic yellow-nosed albatross and white-chinned petrels.

“It’s hard to envisage so many birds being killed in individual fisheries on an annual basis, not least for the fishers themselves who see lots of birds gathering behind their boats and perhaps might only bring up 1 or 2 in a haul.” said Rory Crawford, Bycatch Programme Manager at the RSPB. “But the cumulative effect for albatrosses in particular has been devastating – 15 of 22 species are threatened with extinction. Mercifully, this is a problem for which there are simple and elegant solutions.”

Since establishing the scale of the issue, the Namibian ATF has worked with the fishing industry on-board to demonstrate so called ‘mitigation measures’ like bird-scaring lines – simple ‘scarecrow’ type rope lines paid out behind the vessel that scare birds away from baited hooks or dangerous trawl cables. After many thousands of hours at sea and in ports building support for these measures and the importance of protecting seabirds, in 2015 the team were successful in advocating for fishery regulations requiring the use of mitigation measures by law.
These new laws meant that bird-scaring lines were widely adopted across the fleets, and the new study demonstrates just how effective the potent combination of grassroots engagement and solid regulations has been.

Samantha Matjila, the Namibia ATF Team Leader with the Namibia Nature Foundation, said: “It’s truly wonderful to see bycatch drop by such a huge amount in Namibia. Our waters are crucial for many globally threatened seabirds – to think that our collaborative efforts with all the vessels and the fishery managers has resulted in more than 22,000 birds being saved every year is something special.

“With the right levels of government investment and support, we hope that low levels of bycatch can be sustained long into the future, and that Namibia can serve as a marine conservation inspiration at a time when it is sorely needed!”

The next step is to make sure that the approaches developed by the ATF are hard-wired into the long-term management of the fishery. Albatrosses are very long-lived birds (some species breed into their 60s), so conservation efforts need to be sustained over time. Titus Shaanika, Senior ATF Instructor in Namibia, noted: “The industry has done a remarkable job to reduce seabird bycatch so substantially over such a short period. The big challenge now is to keep up those hard-earned reductions, and to wear them as a badge of honour – we can and we must do more of this across the world if we want turn the tide on biodiversity loss.”

The hake fishery recently secured Marine Stewardship Council (MSC) sustainable seafood certification, and bird bycatch was an important consideration in the assessment.  The fishery picked up some conditions of certification – including the need to improve the uptake of bird-scaring lines in the trawl fleet, and to ensure that effective bycatch monitoring continues. The ATF Namibia team will continue to work closely with industry to support the implementation of these conditions.

These results are timely for the UK, which is on the cusp of producing its own National Plan of Action for reducing seabird bycatch, after recent reports highlighted that the northernly cousins of albatrosses – fulmars – are being caught in longline fisheries operating off the north coast of Scotland.

Rory Crawford highlighted the opportunity to follow the lead shown in Namibia: “There is lots to be learned here in the UK from the success story in Namibia. The ingredients of at-sea engagement, mitigation measure testing, strong regulations and very high observer coverage on Namibian vessels could easily be translated to our waters if the will and resources can be found. So let’s hope the UK’s plan of action is full of effective actions like these.”
​
The Namibian team is the second of five ATF teams across the world to have achieved a more than 90% seabird bycatch reduction, hot on the heels of similar success in South Africa in 2014, where albatross bycatch was reduced by 95% in the hake trawl fishery. In the next two years the aim is to demonstrate similar reductions in Argentina and Chile, and to have made a major contribution to the improved conservation status of some of the world’s most remarkable – yet threatened – birds.
OTHER POPULAR STORIES TO READ: