'It’s incredibly exciting to be on the cusp of a new generation of totally wild cranes that will hopefully start to re-colonise parts of Britain that haven’t seen cranes for four centuries.' - Nigel Jarrett, WWT Head of Conservation Breeding 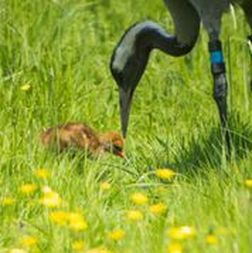 Newly-hatched chick, Image: WWT
This newly-hatched chick – photographed at WWT Slimbridge Wetland Centre in Gloucestershire – is the first wild-born crane to survive in the west of Britain for 400 years.

The parent birds were hand-reared by The Great Crane Project reintroduction programme and released as three month old fledglings on the Somerset Moors and Levels, where cranes were once commonplace before disappearing in the 1600s due to hunting and habitat loss.

Last year the parents managed to hatch a chick but it died before ever leaving the nest. This year footage of the newly-hatched chick shows it swimming near the nest and looking healthy. Visitors to Slimbridge have been able to watch the chick from one of the public hides.

Conservationists behind the project hope this chick survives to adulthood and takes the reintroduction programme to the next stage.

WWT Head of Conservation Breeding Nigel Jarrett, who helped design the reintroduction programme, first spotted the chick on the webcam that’s been trained on the nest. He said: “It’s incredibly exciting to be on the cusp of a new generation of totally wild cranes that will hopefully start to re-colonise parts of Britain that haven’t seen cranes for four centuries."

“The chick hatching last year confirmed that the cranes we hand-reared were physically able to breed. This year we’ve got everything crossed that everything goes in their favour and they can rear this chick. There’s been an overwhelmingly positive response to the return of the cranes from people across the west of Britain. They are a fantastic advert for restoring wetland habitats.”

Damon Bridge, RSPB Project Manager for the Great Crane Project said: “This is a very exciting moment in the reintroduction, and the hatching on the WWT Slimbridge reserve marks the start of a new phase for the project. The young cranes are learning and adapting to their new home in the UK and are still searching for suitable sites to successfully rear their young. I wish these two pioneering birds the best of luck over the next critical few weeks!”

A second pair of cranes has nested nearby and staff and visitors at WWT Slimbridge are watching carefully to see if they too manage to hatch a chick. People wanting to see the crane chick can visit WWT Slimbridge in Gloucestershire every day between 9.30am and 5.30pm, or watch live via the webcam anytime of the day.

The Great Crane Project is a partnership between WWT, RSPB, Pensthorpe Conservation Trust and Viridor Credits Environmental Company and has reintroduced 76 cranes over the last four years and Nigel Jarrett’s team is currently rearing one final group for release later this summer.

www.wwt.org.uk/visit/slimbridge/
SIMILAR ARTICLES YOU WILL APPRECIATE: