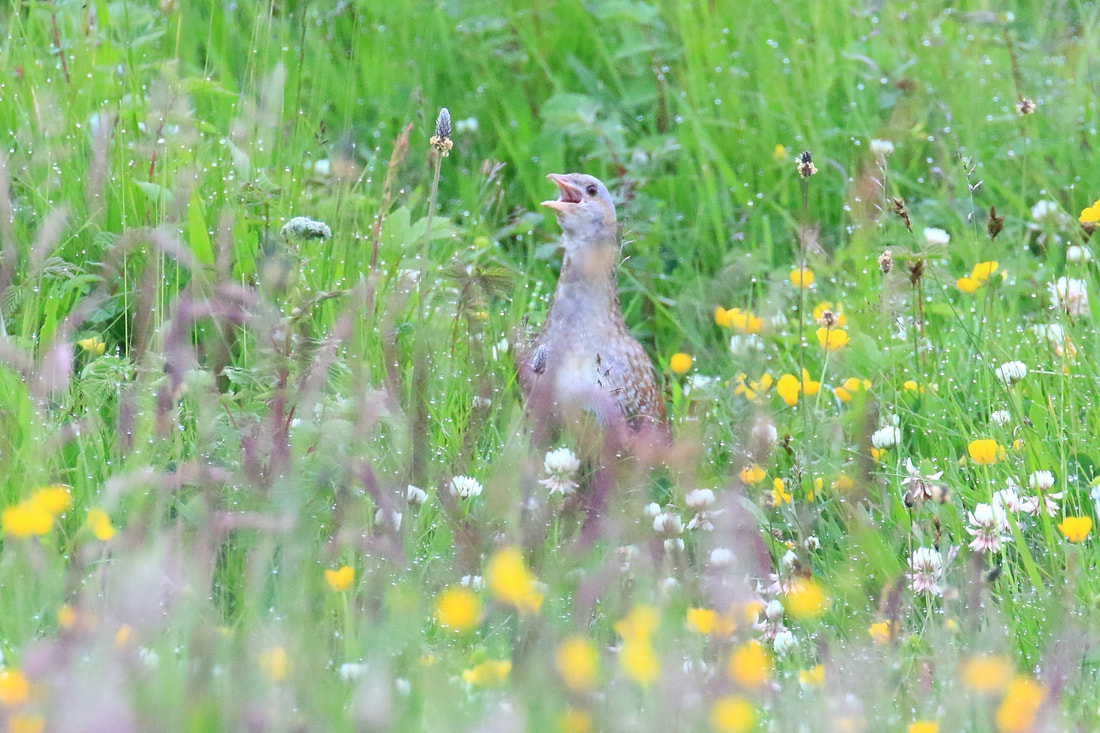 A calling corncrake captured on camera this summer by wildlife photographer Ronald Surgenor
For the first time in 30 years it’s been confirmed that there are two pairs of corncrakes on Rathlin Island, Northern Ireland.

The corncrake is one of our rarest and most secretive birds and is a red-listed species (a bird of high conservation concern). While many people can fondly remember hearing its call in years gone by, Rathlin is the only place in Northern Ireland where the birds have been heard in recent years.

A male has been heard calling in one location on Rathlin each year since 2016 and now RSPB NI staff have recorded two breeding males in two separate sites on the island this summer.

Known for their unmistakeable ‘crex-crex’ call, corncrakes are highly secretive and like to settle in early growing tall vegetation like nettles, cow parsley and irises. One of the sites - in Church Bay - is on land owned by an islander but managed by RSPB NI that has had nettles planted by staff and teams of volunteers to encourage the birds – summer migrants from western Africa – to return to Rathlin.

RSPB Rathlin Island Warden, Liam McFaul said: “It’s fantastic and really encouraging that the work we’re doing for corncrakes is making a difference. It's been an exceptional year because for the first time since the 1980s we have two calling corncrakes and this is brilliant. The birds have two broods and the second brood will be hatching in late July.”

Corncrakes are rarely spotted but the Church Bay male bird has been calling during the daytime now since mid-May and has come out into the open on occasion and has even been captured on camera.

Liam has a theory about why the ‘Love Island’ bird is so vocal and has been spotted moving around. “He has been calling out in two or three different locations and then he's moving across the road to the other side and is calling quite a lot, all night long and quite often during the day. “Because of this behaviour, this could indicate that there could be more than one female in that area and he's tending to two areas at once. But because the females are silent, we don't really know.”

The second male corncrake has been recorded on private land owned by wildlife-friendly farmer Richard Green and his family on the western end of Rathlin.

Liam McFaul believes the return of a sustainable corncrake population would be a huge boost for the island. “Hopefully we will see their numbers increase and get a sustainable population, with four or five pairs regularly breeding, and this feels more achievable after this landmark year. Each breeding pair can produce up to 16 eggs each breeding season, although there is a high mortality rate with these birds. Increasing corncrake numbers could be a big tourism benefit for Rathlin. People travel to Tory Island in Donegal just because of the corncrakes there. “

He explains why the RSPB volunteers have played their part in this conservation success story on Rathlin. “We've been creating areas of early cover over the last 15 years or so. This has involved teams of volunteers on the mainland over the winter digging up nettle rhizomes because that's ideal habitat for corncrakes. If you plant them they grow early in the season and that encourages the birds to come in.
“Nettles are brilliant because it creates this open structure where the birds can hide below them and work away through the vegetation. The nettles hold a lot of invertebrates and insects that they can feed on so it's like their shelter, their hiding place and their food store all in one.

“I’m sure some volunteers will spend a day digging nettles on a wintry day and think ‘What’s this all about?’ But when you stand here now on a summer’s day and think there's a bird that's globally threatened and you have helped to save it by just going out and digging up some nettle rhizomes, well you know most of the people involved will be absolutely delighted at the results.”

After the second brood hatches later this month, the birds will migrate back to Africa in August or September.

Corncrakes are easily spooked, so members of the public are asked not to try and get close to the birds if they hear their call as they are on private land; and it is also important that the birds are not disturbed and that this sensitive conservation effort is not compromised. The photographs of one of the birds this summer were taken with a long lens from a public road.
​
WIN - enter our new photography competition for UK birders here