'Typically weighing between 700g and 1,700g depending on gender and age, it is the second largest Australian owl after the fantastically-named, Powerful Owl.' 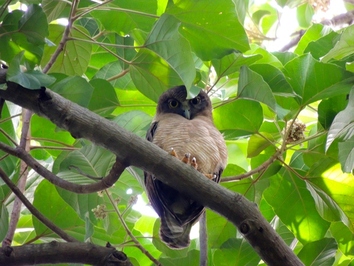 Image: newsroom.nt.gov.au
Rare Rufous Owls including two adults and one juvenile have been delighting birders at the George Brown Botanic Gardens in Darwin with its recent return. The sighting on 20th November is the first in the area for over two years.

Notoriously nocturnal and solitary predators, Rufous Owls are rarely seen. But a keen birder travelling through Australia's Northern Territory was determined to find a Rufous Owl before heading over to Western Australia. The talented individual spotted the juvenile in broad daylight before reporting the sighting to staff who then went on to find the two adult birds.

The birds common name reflects the rufous-coloured feathers that these owls are covered with in adulthood. While it is uncommon, the species has a wide range, and reside's between Australia, Indonesia and Papua New Guinea.

Typically weighing between 700g and 1,700g depending on gender and age, it is the second largest Australian owl after the fantastically-named, Powerful Owl. Rufous Owls are generalists, meaning that they feed on a wide range of prey. Their prey includes birds, insect and mammals including flying foxes and possums.

As they are nocturnal birds and will remain in their nest or roost during the day, they are very elusive. The best chance for anyone heading that way (by chance) is to head over to the Rainforest Loop at the at the George Brown Darwin Botanic Gardens.