New report finds a third of Welsh birds are in decline

'Birds are a great indicator to the health of our environment. The continued population declines of birds of farmed, woodland and upland habitats suggest there are large geographic themes that are having a detrimental impact.' - Patrick Lindley, Maritime Ornithologist for Natural Resources Wales 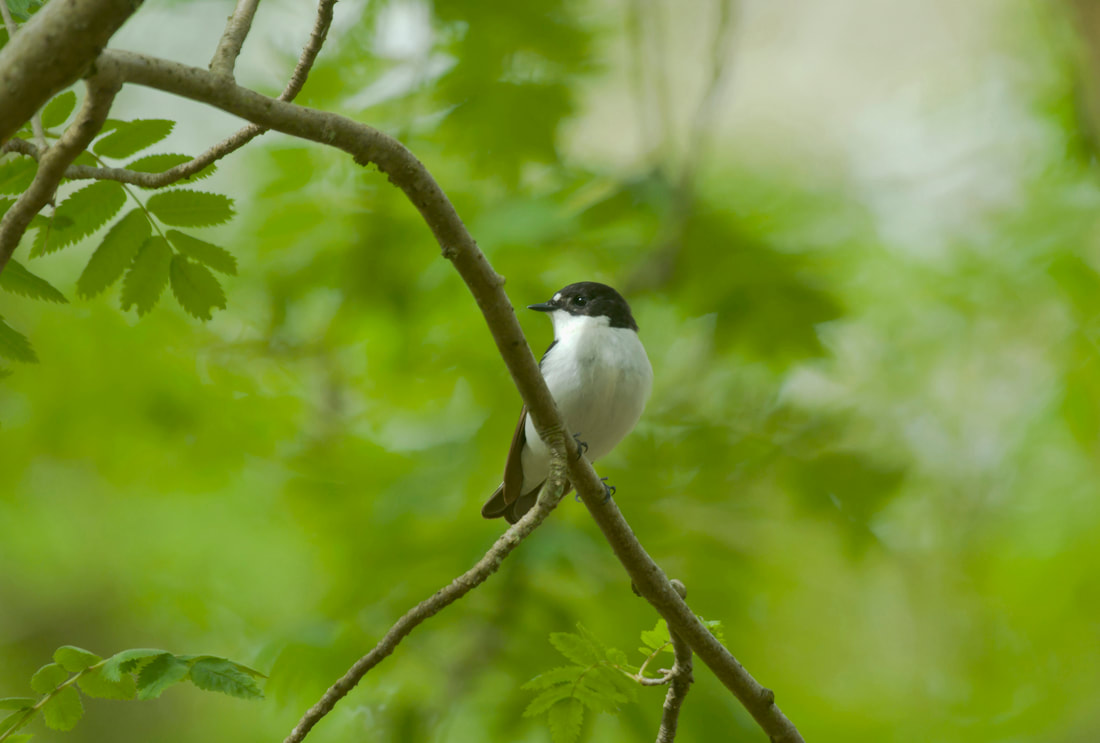 Pied flycatcher sitting in the branches by John Bridges
A new partnership report has shown that a third of our breeding and wintering bird species are declining significantly – emphasising the urgent conservation needed to protect some iconic species.

The State of Birds in Wales 2018 report is a one-stop shop of results from annual, periodic and one-off bespoke surveys across Wales. It has been produced by The British Trust for Ornithology (BTO), the Welsh Ornithological Society (WOS), Natural Resources Wales (NRW) and RSPB Cymru.

The report highlights how breeding birds of upland farmed habitats, such as curlew, golden plover, black grouse, red grouse and ring ouzel have all seen their numbers decline. Whilst Wales holds over half of the chough population found in the UK & Isle of Man and numbers in Wales are stable overall, there is real concern about declines in numbers breeding inland in north and mid Wales since 2002. The report also showed how breeding kittiwakes have declined by 35% in Wales since 1986, while the breeding range of black-headed gulls has shrunk by 52% since 1970.

The report highlights how we are in real danger of failing to learn from history. Many species have already disappeared from Wales, such as corn bunting, dotterel and nightingale, due to changes to the environment and climate impacting on their habitats and reproductive strategies.

Wales holds important seabird populations, with a global responsibility for Manx shearwater, where up to 60% of the world’s breeding population are found on four Welsh Islands (Skomer, Skokholm, RSPB Ramsey and Bardsey). Another island off the coast of Pembrokeshire, Grassholm, holds the third-largest gannetry in the UK.

Most bird monitoring in Wales is undertaken by volunteers who contribute over 5,000 hours of their expertise every year in surveys utilised in this report. Citizen science plays a crucial role in saving Wales’ species from extinction and there are plenty of opportunities for people to get involved, helping with the science, through practical intervention or by showing support for wildlife across Wales. To find out more about how you can get involved, please visit the websites of the organisations behind the report.

Neil Lambert, RSPB Cymru Head of Conservation Management, said: “We find it unacceptable that a third of Welsh birds are declining significantly and there has never been a more crucial time to get involved in the fight for nature’s future. Public involvement is the all-important ingredient in reversing declines by allowing us to discover more about their plight and how we can help safeguard their future.

“With 90% of Wales farmed, agricultural practices have a huge impact on birds and other wildlife. Leaving the European Union provides a unique opportunity to develop new land management policies for Wales that will help farmers restore nature. Our communities and future generations stands to be poorer without the curlew’s haunting call or the black grouse’s flamboyant lek and we appreciate all who gave up their precious time in helping create this report.”

Patrick Lindley, Maritime Ornithologist for Natural Resources Wales, said: “The problems that confront UK birds, whether they are breeding or non-breeding, are pressure and threats that confront entire ecosystems.

“Birds are a great indicator to the health of our environment. The continued population declines of birds of farmed, woodland and upland habitats suggest there are large geographic themes that are having a detrimental impact.

“For some species, there is optimism. The recent success of breeding bitterns, marsh harriers and cranes in Wales, demonstrates what can be done by restoring reedbed and wetland ecosystems at appropriate scales.

“However, there is a conservation urgency, unlike anything we have witnessed before, to identify and implement the mechanisms for halting bird declines in Wales within the principles of sustainable management of our natural resources and in our co-existence with the natural world.”

Kelvin Jones, BTO Wales, said: “Wales is a very special place for birds, as illustrated by the important populations it holds, pied flycatcher, redstart and wood warbler are difficult birds to see anywhere else in Britain. It is paramount that we don’t underestimate the importance of Wales, and that we continue to collect high-quality data to help ensure that we still have these special birds in the future. Thank you to all those who go out and take part in the various surveys, without you the picture would be a lot less clear.”

Mick Green, Welsh Ornithological Society Chair, said: “This stock-take shows that Wales is at real risk of losing some of the most-loved birds from our countryside. WOS members are among the most active participants who document these changes, and are keen to help restore bird numbers; but it will take political determination and proper resources for volunteers to play their full role and use their knowledge to help nature recover.”