'While many will be familiar with the disappearance of House Sparrow, Starling and Spotted Flycatcher, it may surprise people to know that House Martin, Mistle Thrush and Greenfinch are heading in the same direction.' -  Report co-author John Marchant 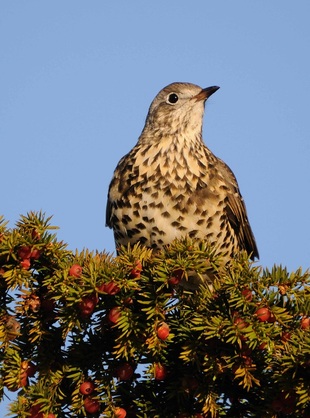 Mistle Thrush, image: Peter Howlett/BTO
During the latter part of 2014, global biodiversity loss hit the headlines with worrying frequency.  Whether it be the rate at which Amazonian rainforests are being felled or the increase in poaching pressure on African elephants and the northern white rhino. Birds have now made it into the news with the release of the British Trust for Ornithology’s (BTO’s) latest BirdTrends report.

Produced in partnership with the Joint Nature Conservation Committee and published online, the document summarises the population trends for 120 breeding bird species across Britain & Ireland using data collected by volunteer surveyors. For the first time, this year’s report provides habitat-specific trends for many species, highlighting those habitats where species are in trouble. While intensive conservation efforts and targeted habitat management have benefited some rarer UK bird species, many widespread and formerly common birds are experiencing severe declines. Twenty-eight species, almost a quarter of those included in the BirdTrends report, have exhibited a fall in numbers of greater than 50% over the last 35-45 years.

“National declines in farmland birds are well-documented and these latest figures show that this decrease is continuing,” explains the report’s lead author, Senior Research Fellow Dr Stephen Baillie. “The results of BTO surveys show that many familiar garden birds are also experiencing problems. House Sparrow numbers have dropped by almost 70% since the 1960s and the data suggest that sparrows occupying urban and suburban habitats are faring worst.”

“The range of garden birds experiencing population declines appears to be increasing,” explains report co-author John Marchant. “While many will be familiar with the disappearance of House Sparrow, Starling and Spotted Flycatcher, it may surprise people to know that House Martin, Mistle Thrush and Greenfinch are heading in the same direction. Again, there is evidence that House Martin and Mistle Thrush declines are most pronounced around human habitation; the BTO will be launching a volunteer House Martin survey in spring 2015 to find out more about the current distribution of breeding populations in order to identify and inform conservation measures.”

So what can be done to reverse these declines?  “We urgently need more data to answer that question, and volunteer surveyors can provide it,” explains Dave Leech, a Senior Research Ecologist at BTO. “Information generated by ringing birds and monitoring their nests proved that the majority of farmland bird declines were driven by a reduction in food availability during the winter. Drivers of garden bird declines are more variable; reduced winter food availability and disease appear to have caused a fall in Starling and Greenfinch numbers respectively, whilst House Sparrows seem to be struggling to rear enough chicks. Data gathered by BTO ringers and nest recorders will help us to identify the mechanisms underlying declines of other species.”