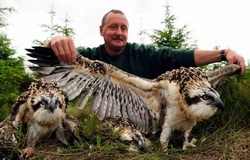 Rather excitingly, a pair of osprey chicks have been discovered by rangers in Northumberland. The Forestry Commission team had only expected to find one chick in the tree 15m (49ft) above Kielder Water and Forest Park, but instead they found two.

This second nest in the 155,000 acre woodland makes Kielder the only place in England for over 170 years to have two osprey families at the same time.

Rangers lowered chicks to the ground in a bag before being ringed and weighed while their mother kept watch from a nearby tree. The rangers climbed the tree using ropes and harnesses before the gentle operation of placing them into a rucksack and lowering them to the ground.

Rings carry vital information like where and when the birds were born and because they can be read over a distance using a telescope, it is the best method of finding out what becomes of the young birds after they leave the nest.

Until now, all the observations of the nest had been made from a distance as the Forestry Commission was keen not to disturb the birds.

Forestry Commission ornithologist Martin Davison said the population of ospreys was slowly growing. He said: "We have two pairs here in Northumberland and there is a very famous pair in the Lake District.

"It is so good to be able to come out here and see the birds because we built the nest then kept an eye on it, but always from a distance so we did not disturb it.

"So to come to the nest and actually get our hands on the chicks is really exciting, because they are big chicks and they are very docile and very beautiful, with big yellow eyes.

"They are absolutely gorgeous."