'The information used to calculate the level of threat comes from a huge range of bird surveys, atlases and monitoring programmes across Europe; some undertaken by staff in the relevant national environment departments but done mainly by non-government organisations supported by thousands of volunteer birdwatchers.' - Dr David Noble, Principal Ecologist at the British Trust for Ornithology and Vice-Chair of the European Bird Census Council (EBCC)

Nature alert: nearly one-in-five bird species in Europe is at risk of extinction 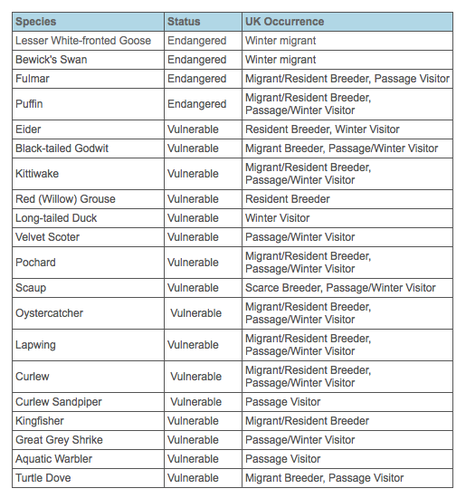 According to the European Red List of Birds, compiled by BirdLife International and using data gathered by BTO volunteers. The list makes shocking reading, with illegal killing and land-use change among the factors thought to be driving the declines evident in many once familiar species.

The new European Red List, launched on Wednesday 5th May in Brussels, paints a grim picture for some of Europe’s iconic and best loved bird species. British breeding birds, like Turtle Dove, Kingfisher, Fulmar and Puffin are all listed as threatened at a European level.

The Red List assesses bird species that are found in the 58 countries that make up Europe, with a separate assessment additionally produced for the 27 EU member states. In the broader list of all European countries, 533 species were assessed, 67 (13%) of which have been listed as threatened. ‘Threatened’ species are those that fall into the top three categories used for assessing conservation status, namely: ‘Critically Endangered’, ‘Endangered’ and ‘Vulnerable’.

Dr David Noble, Principal Ecologist at the British Trust for Ornithology and Vice-Chair of the European Bird Census Council (EBCC), commented, "The information used to calculate the level of threat comes from a huge range of bird surveys, atlases and monitoring programmes across Europe; some undertaken by staff in the relevant national environment departments but done mainly by non-government organisations supported by thousands of volunteer birdwatchers. It is the vigilance of these keen and dedicated recorders that has highlighted the alarming plight of so many species at the European level."

Britain has its own ‘Red List’, which is due to be updated later this year. This uses a different system of classification – ‘Red’, ‘Amber’ and ‘Green’. Of a total of 246 British species, last assessed in 2009, there are 52 species given a Red Alert (the highest level of threat), 126 on the Amber Alert (of concern) and 68 on the Green List (of least concern).

The Turtle Dove is ‘Red Listed’ in the UK and, according to the BTO/JNCC BirdTrends Report has shown a very alarming population decline of 92% over the last 25 years, thought to be linked mainly to reduced feeding opportunities following changes in agricultural practices.

The ﻿Kingfisher﻿ is ‘Amber Listed’ but the picture is a little more complicated because the species is vulnerable to cold winters and during prolonged spells of freezing conditions the population can plummet, as borne out by a population crash during cold winters in the early 80s. The population subsequently recovered but has recently been in decline again, qualifying it for 'Amber Listing’.

Puffin is currently ‘Amber Listed’ in the UK due to its unfavourable population status in Europe and its reliance on a relatively small number of key breeding sites. Although good evidence on population declines is lacking, the Bird Atlas 2007-11 revealed a range contraction of 28% since the early 1970s and recent declines in productivity have been linked with a fall in sandeel populations, the Puffin’s favourite food.

In the image at the top of this article you will find a list of the birds, which occur in Britain as regular breeding or wintering species and listed as ‘threatened’ within the European Red List report.