'There’s much speculation as to what has pushed the UK’s breeding scoters so close to the edge, but so far no definitive answer. So we’re taking a painstakingly detailed approach – analysing the sediment that builds up over decades at the bottom of the lochs for the microscopic fossilised remains of insects, aquatic plants and algae.' - Hannah Robson, WWT 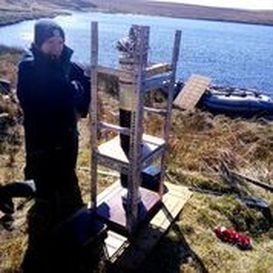 Scientists from WWT and UCL believe the downfall of Britain’s rarest duck - the common scoter, could be written in the murky sediment at the bottom of lochs in the Flow Country, the UK’s largest expanse of wetland.

In order to be as accurate as possible the WWT research team, which is being co-funded by the Natural History Museum, Scottish Natural Heritage and supported by Royal Society for the Protection of Birds has been driving a giant sediment corer known as Big Ben into the bottom of the lochs with painstaking detail and patience.

Essentially,  the 'Big Ben' corer works by removing cores made up of layers that have built up over 30 to 50 years. It was designed and built by researchers and technicians at UCL here. Much wider than traditional corers it allows more material to be collected per slice which enables more fossil indicators to be examined per core. Two current and two historic breeding lochs were selected for coring. The process of analysing these cores is underway in the laboratories of both UCL and Slimbridge.

Like an archaeologist digging down through time, but in miniature, WWT’s Hannah Robson painstakingly sliced the cores and is now analysing each layer for microscopic fossils. By looking at what food was available and other factors, she can reconstruct the ecological history of the lochs and compare those where scoters still nest with those that have been abandoned.

Over the same period, the number of common scoters breeding in the UK has fallen steeply and is down to just 40 pairs confined to remote parts of Scotland. Relatively little is known about scoters compared to other ducks. More than 50,000 previously unknown scoters were found to be wintering at Shell Flat, a sandbank just off the coast of Lancashire, within the last 20 years. Though tens of thousands winter off UK shores, just 40 pairs come ashore to breed (the others head to other breeding grounds in Iceland and the Arctic). That number is declining fast. The few nests that remain are in the most remote parts of Scotland and Ireland.

Hannah Robson said: “The wetlands of the Flow Country are an incredible place. More than double the amount of carbon is stored here than in all the UK’s forests combined. And many of the UK’s most at-risk birds breed here. But the one that brings me here is the biggest concern of all: the inappropriately named common scoter.

“There’s much speculation as to what has pushed the UK’s breeding scoters so close to the edge, but so far no definitive answer. So we’re taking a painstakingly detailed approach – analysing the sediment that builds up over decades at the bottom of the lochs for the microscopic fossilised remains of insects, aquatic plants and algae. We hope to reveal the causes of the scoter’s decline and also, crucially, be able to recommend what needs to be done to help it recover.”

One of Hannah’s supervisors Dr Viv Jones of UCL explains: “We use lake sediments to record pollution and climate change in locations around the world but this is an exciting opportunity to examine the reasons for species decline in one of the UKs most unique ecosystems.”