New edition of classic handbook, released to celebrate 125 years of the RSPB 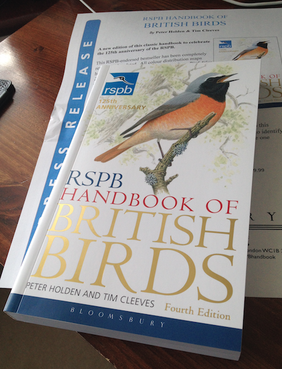 The new handbook on our desk.
A new edition of a classic birders handbook has just arrived at Birding24/7 towers and first impressions of the update are rather pleasing.

Written by Peter Holden and Tim Cleeves, this RSPB-endorsed bestseller has been completely revised and updated for 2014/modern birding standards. For instance, all colour distribution maps have now been redesigned and revamped using data from Bird Atlas 2007-11. Over 40,000 volunteers spent four years scouring the countryside in search of birds to put the Bird Atlas together, submitting their records to the British Trust for Ornithology (BTO). They did this to integrate local information on bird numbers into coherent national pictures of the state of Britain and Ireland’s bird populations, so its great to see this data is being put to further good use.

Additionally, there is a new visual index to bird families on the inside covers, which will make finding a species even quicker, simpler and easier.

The handbook of British birds offers a unique guide and provides a biography of two hundred and seventy common bird species. Covering off behaviour, breeding biology, population, status, longevity and other interesting facts.

There are twelve hundred beautifully drawn colour illustrations inside and the rarities section features twenty-six additional species, including two that are entirely new to this edition of the book. To go alongside the other drawings, there are six comparison artwork spreads illustrating difficult to identify species - such as ducks, waders, warblers, raptors and gulls, all alongside one another.

We shall be giving the book a full review at some point in the near future, but if you want to get hold of a copy yourselves, put a reminder in your calendar for March 27, when the book will be officially released in the UK from its publishers, Bloomsbury at a RRP of £9.99

From what we've seen so far, and if your old handbook is getting a bit tatty - well worth a tenner.