'Climate change is a severe long-term threat to birds and other wildlife. Our book brings together results from studies across the world that document the impacts of climate change on birds that have happened already and those that can be expected in future.' - Rhys Green, Author 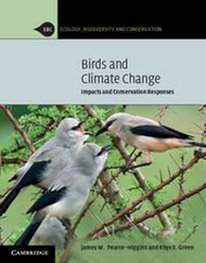 A new book has been published which gives an insightful and detailed look into climate change and the survival pressures being thrust upon bird populations around the world.

Birds and Climate Change documents impacts on a global scale and considers the potential for conservationists to reduce the severity of the threat that climate change may pose to many species.

The publication shows how recent climate change has already had a significant impact on bird populations around the world and how these impacts are projected to become much larger in the future, increasing the extinction risk for many species.

However, on the flip side, the book also gives reasons for cautious optimism. There is a window of opportunity to reduce the threat that climate change poses if action is taken sooner, rather than later. To address this, we need to reduce the future amount of climate change. Increased use of renewable energy can help, although if not deployed carefully, it can also cause unintended but significant problems to many bird species. The other type of action is to adapt existing approaches used to counter threats to bird populations so that they also deal effectively with climate change. The book reviews these two kinds of action and examines their likely effectiveness.

In Britain, the patterns of distribution and abundance of the Red Grouse are closely tied to the availability of heather, the bird’s main food plant. Although heather itself has a wide distribution, the grouse only occurs extensively in the cool, oceanic climate of Britain and Ireland’s uplands. The book highlights that despite many grouse populations being managed for sport shooting, climatic conditions ultimately limit where it is found. It is threatened by future climate change through a range of different mechanisms, from effects on food availability and heather quality, to those on disease incidence. However, there may be management measures which could be taken to reduce these impacts.

The globally-threatened Ethiopian Bush-crow occupies a very restricted area at the southern edge of the Ethiopian Highlands. It lives in a mosaic of grassland and acacia vegetation, formerly maintained by wild grazers but now by domestic livestock. Suitable habitat appears to be plentiful right outside the species’ range and it appears that the Ethiopian Bush-crow is limited in its range by effects of temperature: it does not occur outside areas with a mean annual temperature range of 16.5-20°C. In effect it lives in a discrete temperature bubble, which may well burst when the climate changes.

These are just two examples of the effect a changing climate might have on birds, many more are explored within the book.

Author, Rhys Green (RSPB) continued: "Climate change is a severe long-term threat to birds and other wildlife. Our book brings together results from studies across the world that document the impacts of climate change on birds that have happened already and those that can be expected in future. More important, we explore how negative impacts of climate change on bird conservation could be countered by understanding better how they work. Researching this book gave us a fascinating insight into the way nature is being shaped by these global changes, and this should serve as a warning for the future. I hope that bringing this evidence together will help inform future scientific studies in this area and conservation efforts to save species on the edge. Even so, we need to do much more to understand how climate change is affecting life on earth."