How did the 2012 downpours affect nesting garden birds and what will 2013 hold? 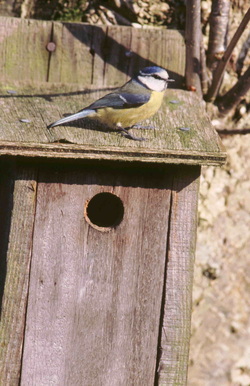 Photo: Tommy Holden/BTO
After contending with an exceptionally wet spring and summer, in most parts of the UK last year, how will birds nesting in our gardens fare in 2013? Help the BTO find out by taking part in the Nest Box Challenge (NBC).

The BTO is calling on householders across the UK to help them track the progress of nesting birds in gardens during 2013 by getting involved in this year’s Nest Box Challenge.

Gardens provide both food and nest sites for birds, and an increasing number of species are choosing to raise their offspring in our back gardens. Recent analyses of BTO data suggest that over a third of UK Blackbirds now nest around human habitation, favouring thick hedges and shrubs, while over a fifth of the nation’s Blue Tits breed in our villages, towns and cities.

Birds had to contend with an exceptionally wet summer in 2012, which reduced the abundance of caterpillars, a food source that species such as Blue and Great Tit depend on to provide food for their chicks. A comparison of NBC results for 2012 with those from the Nest Record Scheme (NRS), the BTO’s survey of nesting birds in the wider countryside, suggests that those breeding in gardens may have fared better, as NBC Organiser Hazel Evans explains: “Blue Tit and Great Tit clutch sizes in all habitats were around average in 2012. However, NRS participants recorded a reduction in brood sizes of about 20%, a much bigger drop than that noted in gardens by NBC participants.”

If birds in gardens are better able to cope with extreme weather events, this could have longer-term implications with regards to climate change. “The impact of weather, be it a wet summer or a warming climate, on the breeding success of birds, may be influenced by their diet,” states Dr Dave Leech, Head of the Nest Record Scheme at the BTO. “If birds are increasingly foraging on non-native garden plants or relying more heavily on supplementary food, they may be less susceptible to changes in the availability of more ‘traditional’ foodstuffs, such as caterpillars.”

“Will the terrible weather in 2012 have reduced the numbers of birds breeding in gardens this year?” asks Hazel, ”and will the cold winter lead to smaller clutches and fewer fledglings? Nest Box Challenge participants can answer these questions by counting eggs and chicks in any nests they find in their garden, from Collared Doves on satellite dishes to Blue Tits in boxes, and entering their records on the NBC website.”