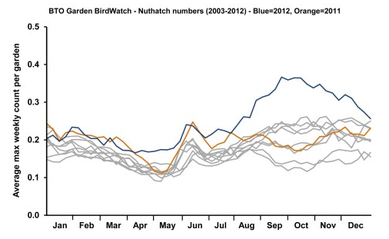 Data + image: BTO
Annual results from the weekly BTO Garden BirdWatch, which have just been published, reveal a significant movement of Jay, Nuthatch and Coal Tit into gardens during Autumn 2012, suggestive of a widespread failure in the seed crops of various trees.

The results also reveal a substantial change to the seasonal pattern of garden use by Siskin, a species of finch that has benefited from maturing conifer plantations more widely. Earlier in the year, there was also a substantial cold weather movement of thrushes into gardens when a period of widespread snowfall made feeding conditions elsewhere difficult.

Some 15,000 ‘Citizen Scientists’ support the BTO’s Garden BirdWatch survey, submitting observations of the birds and other wildlife using their gardens on a weekly basis throughout the year. These observations are analysed and interpreted in real time as they come in to the BTO’s database of 86 million observations. Looking back at the previous 12 months, however, provides an opportunity to pull together the main patterns and stories and to examine these alongside other sources of information.

The biggest story was the very large influx of Jays, Nuthatches and Coal Tits to UK gardens during late summer and early autumn, strongly suggestive of a widespread failure of the tree seed crops on which these species depend. By the end of September, the numbers of Nuthatches using UK gardens were up by 91% on the long-term average, while Jays were up by 70% and Great Spotted Woodpeckers were up by 64%. The poor crop of beechmast is thought to be behind such a pronounced movement into gardens, with effects also seen in Woodpigeon, Great Tit and Chaffinch. A similar pattern was seen in some of the species feeding on conifer seed, notably Coal Tit and Siskin1.

2012 was an exceptional year for Siskins in gardens. The normal pattern of garden use in this species has tended to be for a late winter peak (in January and February), numbers then remaining low through spring and summer and only increasing again from late November. The late winter peak was much reduced in 2012 but was then followed by three other peaks: one in late April (linked to a period of poor weather), one in late June (linked to family parties looking for food) and one in September (matching the poor autumn seed crop). Use of gardens throughout the summer months and early autumn is increasing in this species, to the extent that one in ten gardens is now visited by Siskins during a typical summer week. This reflects an increasing breeding population, supported by maturing conifer plantations, and increased use of garden bird feeders.

A pronounced movement into gardens during early February 2012 was noted for a number of bird species, including Blackbird, Fieldfare, Redwing, Song Thrush, Black-headed Gull and Reed Bunting, underlining the important role that garden feeding stations play during periods of cold weather and snow cover.

Mike Toms, Head of Garden Ecology at the BTO, commented "The weekly Garden BirdWatch survey is proving to be a very powerful tool, enabling us to monitor the changing use of gardens, bird tables and hanging feeders by birds. To be able to pick up the effects of failing seed supplies, periods of cold weather and changing breeding populations is key to understanding the role that gardens play within the wider landscape. It is only because of the efforts of our ‘citizen scientists’ that we are able to collect and use this important information on a weekly basis throughout the year."