For the first time in 29 years roseate terns, the UK’s rarest nesting seabirds, hatch four chicks on The Skerries, off Anglesey 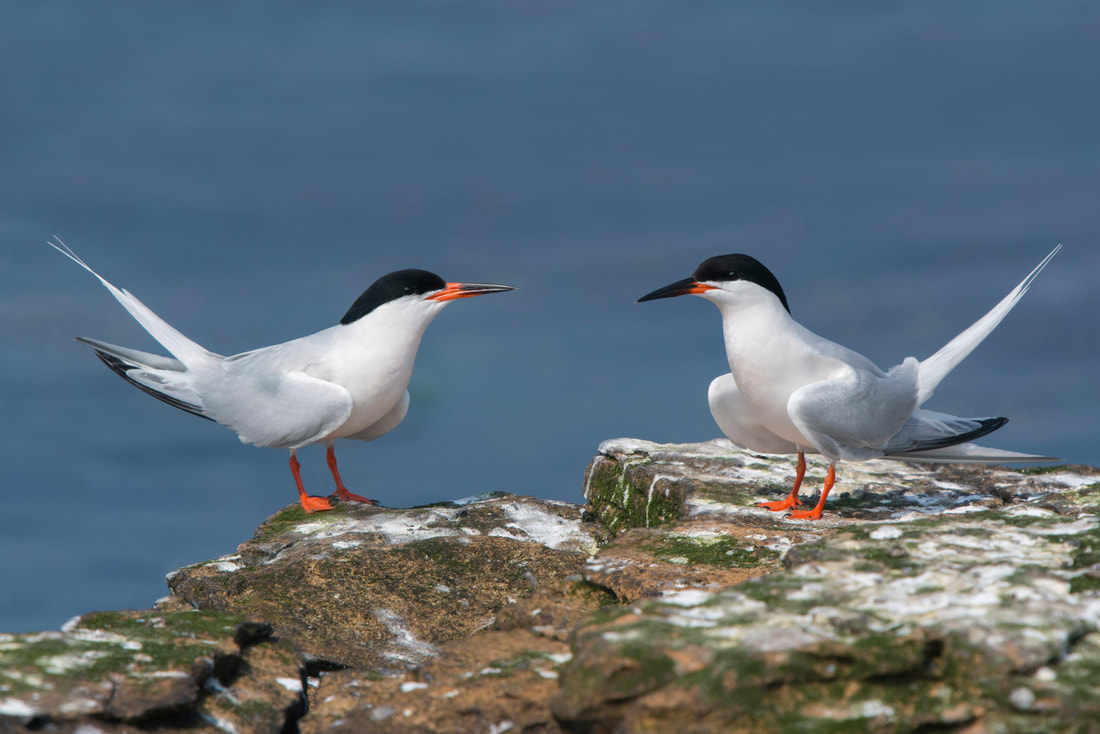 Pair of adult roseate terns by Tim Melling (rspb-images.com)
The UK’s rarest nesting seabirds have hatched four fluffy chicks on The Skerries, off Anglesey, for the first time in 29 years.

The roseate tern chicks arrived in late June, with two pairs of roseate terns each having two hungry beaks to feed. More good news has come as the four chicks have now successfully fledged.

Roseate terns have long tails, and beautiful pale feathers with the slight rosy flush that gives them their name. These endangered birds, affectionately called "rosys", fly each spring from western Africa to nest at just a handful of coastal spots in the UK and Ireland.

In Wales, nesting roseate terns are rare. So, 2018’s successful nesting attempt of a single pair on the Skerries for the first time in 12 years was an exciting development. The arrival of this year's second pair is an encouraging sign that numbers of these birds are growing.

The Skerries are a group of small rocky islets which lie just off the northwest corner of Anglesey, Wales. Due to its sparse vegetation and rough terrain, it is inhospitable to humans. However, the islands are an extremely important sanctuary for nesting seabirds, especially terns. The largest Arctic tern colony in the UK, depends on these islands: in 2018 over 3,000 pairs of these birds raised their young here, along with more than 300 common tern pairs. During the summer, the islands are also home to nesting puffins, along with herring, lesser, and great black-backed gulls.

RSPB Cymru Warden Ian Sims said: "The arrival of these chicks is thanks to the dedicated RSPB staff who have worked hard to protect the seabirds on the Skerries over many years. Roseates like to have other types of terns for company, and the success of a single pair in 2018 and two this year shows they are being attracted to the thriving colony that our wardens have nurtured. The future here looks rosy for the rosys!"

Work on the islands to keep them perfect for the terns includes keeping the larger gulls at bay and making sure invasive mammals like rats have not found their way into the colonies, as these animals would eat tern chicks and eggs.
Ian and his team hope that as their conservation work continues, these rare terns will settle on the island and return to nest here in years to come, creating a true Welsh roseate tern colony.

In recent years, the EU-funded Roseate Tern LIFE Recovery Project has focused on protecting the remaining areas and creating further roseate tern-friendly sites across the UK and Ireland in the hopes of re-establishing thriving colonies. The LIFE Project have provided additional staff, equipment and habitat management.

The Skerries is owned by Trinity House and it is with their permission that the RSPB manages and protects the seabird colony.

For more information about the Roseate Tern LIFE Recovery Project, please visit www.roseatetern.org or follow the team on Twitter: @RoseateTernLIFE