'It’s fantastic that this storm petrel chick has been recorded on the Shiants. After the adult was recorded last year we thought it highly likely that they were breeding so to have this confirmed now is great for the project and for the species in Scotland.' - Dr Charlie Main, Senior Project Manager for the Shiant Isles Recovery Project ​ 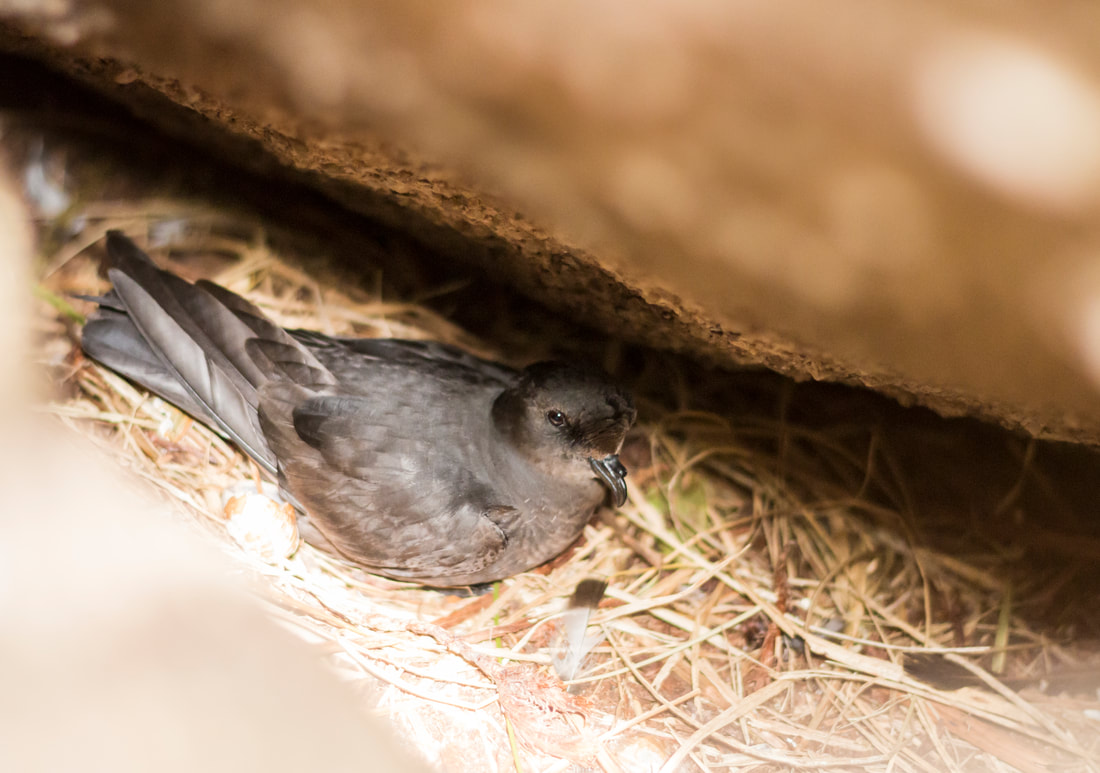 Storm petrel sitting on nest beneath a huge boulder on the Isles of Scilly, June, 2018 by Ed Marshall (rspb-images.com)
A European storm petrel chick has been recorded calling on the Shiant Isles for the very first time. This is an important step for the Shiant Isles Recovery Project as it’s the first known breeding of these seabirds on the islands.

The EU LIFE+ funded project played an artificial call of an adult storm petrel outside the suspected burrow nest site to record the chick’s reply call and confirm its presence. The project, a partnership between RSPB Scotland, Scottish Natural Heritage and the Nicolson family, the custodians of the islands, has been working over the last four years to make these islands, five miles off the coast of Harris, a safer place for Scotland’s globally threatened seabirds to breed. Island restoration projects such as this one are a key part of  helping Scotland’s struggling seabird populations develop resilience to ensure their long term survival.

Storm petrels were not able to breed successfully at the Shiants because of their vulnerability to predation from the islands’ population of invasive non-native black rats. These were eradicated over the winter of 2015/16 and the islands were officially declared free of rats earlier this year.

Following the eradication, the project has been working to attract storm petrels to breed on the islands as it has ideal habitat for their nests in the many areas of boulders around the islands. These birds are little bigger than sparrows and only come to land in summer to breed. Scotland’s internationally important population currently nests at only a few offshore islands because of the presence of ground predators at other potential sites.

During the summer of 2017, calling storm petrels were recorded on the Shiants for the first time. This distinctive “churring” call was heard from burrows giving a strong indication that the birds were attempting to breed. However, no chicks were recorded so it was unclear whether they had been successful in hatching a chick.

Dr Charlie Main, Senior Project Manager for the Shiant Isles Recovery Project said: “It’s fantastic that this storm petrel chick has been recorded on the Shiants. After the adult was recorded last year we thought it highly likely that they were breeding so to have this confirmed now is great for the project and for the species in Scotland. It’s also another vital step for making these islands a safer place for Scotland’s internationally important seabirds, many of which are struggling to cope with the impact of climate change and a lack of suitable secure breeding sites.

“We’ve strong hopes for the future that more storm petrels will breed here and a colony will be established. Three other calling adults were recorded this summer suggesting that there may have been more breeding attempts. This one chick is incredibly special to everyone who has been involved in the project since 2014; it means that all the work we’ve been doing to make and keep these islands free of invasive predators is paying off. It also shows just how quickly island restoration can make a difference to seabirds which is really positive for future projects like this one.”

Adam Nicolson said: “The tiny, vulnerable peeping of the storm petrel chick was one of the most optimistic sounds to have been heard on the Shiants in living memory. In that one sound, and extraordinarily quickly, all the effort, skill and organisation of the Shiant Isles Recovery Project has already begun to find its reward. This is only the beginning. At a time when the news from the natural world is consistently dire, this is a small move in the other direction, and one which carries within it at least some hope for a better future.”

Dr Andrew Douse, Policy and Advice Manager for Ornithology at Scottish Natural Heritage (SNH), said: “The recovery of storm petrels on the Shiant Isles was one of the key aims of this project so to see it beginning to happen so quickly is excellent news. Hearing the call of a chick for the very first time is a real milestone and a vindication of the benefits of removing non-native species from the islands. This has been a fantastic partnership project and as it draws to a close, SNH pays tribute to RSPB Scotland and the Nicolson family for everything that has been achieved.”

The project is due to draw to a close this autumn and is currently focused on securing the biosecurity legacy for the islands to ensure that no other ground predators, which would threaten its special wildlife, are able to establish themselves on the Shiants.
​