'We already knew that bird communities might change because some species aren’t moving northwards as fast as others. But if they are also diverging in space, the communities of tomorrow could be very different than those found today.' - Simon Gillings, Head of Population Ecology & Principal Ecologist 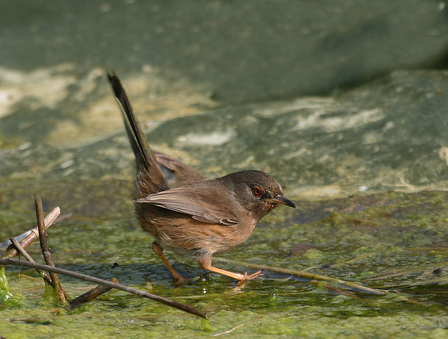 Dartford Warbler, image: Jill Packenham/BTO
Is it better to live in the north or the south? It’s a question that it seems even birds are struggling to answer as the climate in different parts of Britain changes in a variety of ways.

Scientists have known for some time that global warming is causing the distributions of species to shift. Whether its warmth-loving species like the Dartford Warbler spreading north as our country‘s temperatures rise, or the cold-adapted inhabitants of our mountains retreating further up hill, the signature of climate change is commonplace. However, researchers are increasingly realising that not all species are tracking the climate in the same way. One reason may be that individual species respond to subtly different aspects of climate, such as temperature or rainfall at critical times of the year. Understanding this will help policymakers to adopt conservation and land management strategies that effectively assist species survival.

BTO scientists compared detailed distribution maps for 122 British birds in 1988–91 and 2008–11 to measure the complex ways in which their breeding distributions have changed. This data, collected in a standardised manner by thousands of volunteer bird surveyors, provide a unique barometer of the impacts of climate change on this one component of British biodiversity. Over these two decades temperatures in spring and summer have increased, which should have pushed species to the north-west if this aspect of climate change is key to their success, whilst higher temperatures in winter should have pushed them to the north and north-east. In contrast, if spring rainfall is critical to species, they should have been pushed to the west.

When the BTO scientists looked at how bird distributions had actually changed over this period, they found that birds had indeed shifted to the north, on average by 13.5km, which continued a trend seen in previous decades. However, they also found that more than a quarter of species had extended their ranges to the north-west and north-east, and that almost half had retreated from southerly directions. Overall the range shifts could not be explained by any single climatic factor, leading the researchers to conclude that the distribution changes for British birds are complex, multi-directional and species specific.

Simon Gillings, Head of Population Ecology & Principal Ecologist said, "We already knew that bird communities might change because some species aren’t moving northwards as fast as others. But if they are also diverging in space, the communities of tomorrow could be very different than those found today."

Some species are apparently adapting to the changing climate, or even benefiting from it. However, others are not and it is not yet clear what impact the arrival of species new to particular areas will have on existing biodiversity. There is therefore still much to learn in order to effectively manage the impacts of anthropogenic climate change on our wildlife...