Cuckoo's are on their way back - so its hello BST! 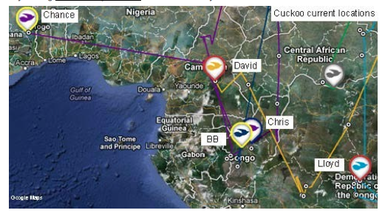 Image: BTO
For many of us, the song of the Cuckoo is the sign that the great British summer has arrived  If this is the case then, according to the British Trust for Ornithology (BTO), summer is now on its way back to see us.

Scientists at the BTO have spent the winter keeping a watchful eye on five very special Cuckoos. All five have been fitted with satellite tags that relay information approximately every two days to the BTO headquarters in Thetford, Norfolk, opening a door into their lives away from their breeding grounds in the UK.

Having spent the last four months feeding along river valleys in the mighty Congo Rainforest, maybe sharing their winter location with gorillas and African Grey Parrots, three of the five are on their way back. Welsh Cuckoo, David, was the first to move. On 30 January, he was 980km (608 miles) north of his winter location, in the Central African Republic. He has since travelled another 300km (186 miles) west and is now in a remote patch of forest in southern Cameroon.

Chance, the Scottish Cuckoo, followed shortly after, overtook David and is now, as of 25 February, in Ghana, at the northern tip of Lake Volta. The third Cuckoo, Lloyd, made his move on the morning of the 19 February, travelling 204km (126 miles) north-west of his wintering location.  He is still south of the Equator but could cross it any day now.

BTO Cuckoo project’s Rachel Gostling, said, “It is fantastic to watch this year's tagged Cuckoos making their way back to the UK, and to see that summer is on its way. Since we started tracking Cuckoos we have discovered loads of new information about their migration and it’s going to be interesting to see if these birds in the second year of the project confirm what we saw from the Cuckoos last spring. Perhaps they will surprise us yet again and reveal more pieces of the Cuckoo behaviour jigsaw”

She added, “Anyone can follow the Cuckoos as they undertake their incredible journeys by visiting www.bto.org/cuckoos to see where they are now”