'It’s incredibly exciting to be on the cusp of a new generation of totally wild cranes that will hopefully start to re-colonise parts of Britain that haven’t seen cranes for four centuries.' - Nigel Jarrett, WWT Head of Conservation Breeding

Cranes are like buses, you wait 400 years and then two come along at once! 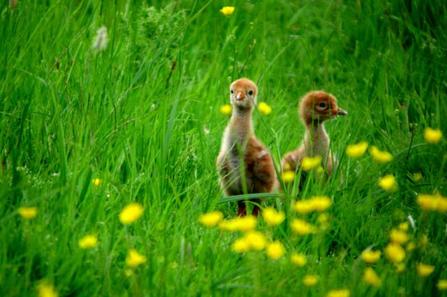 Two healthy crane chicks, Image: WWT
This picture confirm's the Slimbridge cranes – Monty and Chris – are the proud parents of two healthy chicks, the first in the west of Britain for 400 years.

The second chick was seen for the first time yesterday afternoon when the siblings took their first stroll away from their parents, and there was an amazing reaction from the crowd as staff and visitors saw them both together for the first time.

The young family are being closely watched from the hides at Slimbridge and on the WWT webcam. So far they have stayed close to the nest site, indicating that there is plenty of food for the chicks.

Cranes usually hatch two chicks, but when food is scarce one will perish. Crane chicks compete aggressively for food and already these two have been seen pecking and kicking each other.

It is hoped the chicks can survive each other and any predators over the coming weeks so they become the start of a new wild-born generation of cranes in the west of Britain.

More update as we get them...

www.wwt.org.uk/wetland-centres/slimbridge
SIMILAR ARTICLES YOU WILL APPRECIATE: