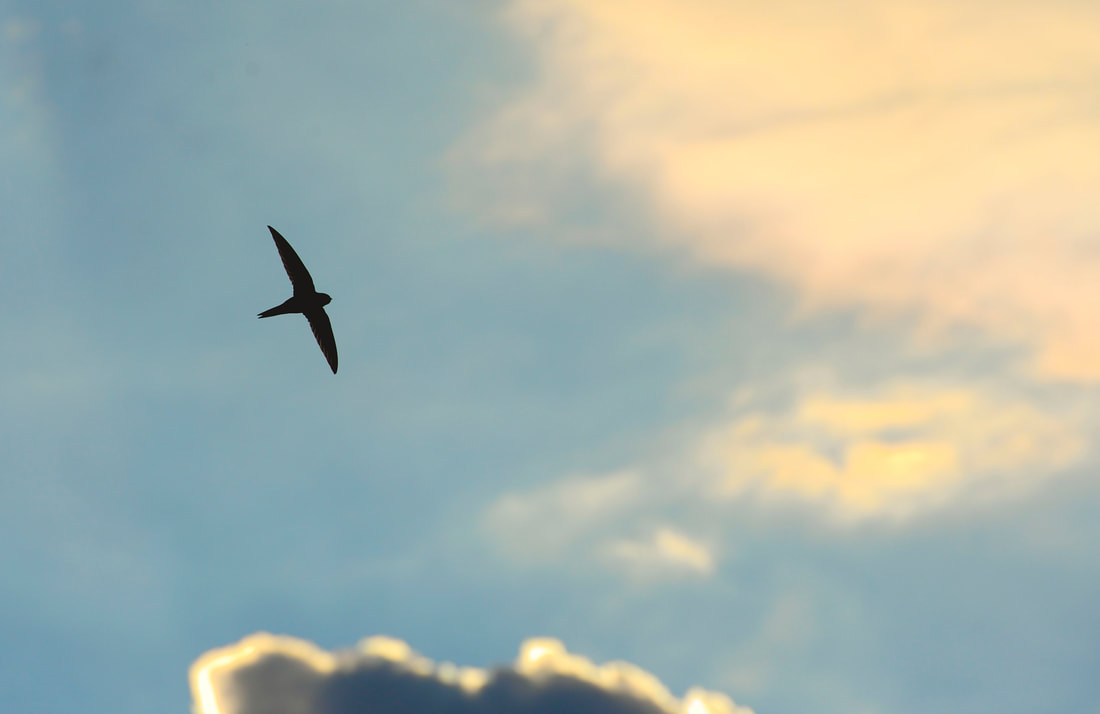 Lone swift flying over rooftop by Ben Andrew (rspb-images.com)
Wildlife experts who are working to save the UK’s dwindling swift population are concerned at the late arrival of these birds, which nest here after spending the winter in Africa. Many swifts have arrived up to two weeks late, and the RSPB has received numerous calls and emails from people concerned at their absence.

What might have caused this delay? Swifts would normally begin their journeys north from Africa in April. Their epic 6,000 mile journey is often fraught with hazards but weather conditions this year may have made migration especially difficult.

When the birds arrived in Europe, they were faced with serious climatic challenges. This year there have been distressing stories from Italy and Spain showing that swifts, some of which may have been on their way to UK nest sites, have even been killed by storms and cold wet weather. Doomed to die of starvation and hypothermia, they have been trying to survive overnight by clinging to each other on walls to avoid the wind and rain.

Swift expert Edward Mayer, who runs the Swift Conservation website and free advice service, says “There has been some really appalling spring weather this year in Italy, France, Spain and the Balkans. Temperatures should have been in the 30s but were in the low teens, and much lower at night, with prolonged rain storms making things even worse. This suppresses the swifts’ flying insect food, soaks and chills them - and can kill them”.

The unseasonably low temperatures in southern Europe will have made life even harder for these small birds desperately needing to refuel for the final leg of their journey. Then predominantly northerly winds have made flying north even harder.

Although these are extraordinarily resilient birds, swifts that make it to the UK face further challenges. They typically nest under the eaves of houses but in recent years many of these spaces have been blocked up leaving the birds with the difficult task of finding somewhere new to raise their young during the limited time they spend here. The RSPB ran a campaign between February and April to encourage people to make new homes for them, by buying either a specially made nestbox or making one of their own.

“Swifts have huge public support in the UK” says Jamie Wyver, the RSPB’s Swift Lead. “Our supporters and social media followers are incredibly enthusiastic about them, and earlier this year we sold well over 1,000 new swift nestboxes! As well as our own regional teams working hard to make sure these birds have plenty of places to nest, there are around 75 independent local swift groups.”

The RSPB’s John Day and fellow swift experts Dick Newell and Edward Mayer recently had published a co-authored article providing advice for ecologists in the membership journal of the Chartered Institute for Ecology and Environmental Management (CIEEM). The article outlines ways in which new building developments can easily accommodate homes for swifts, neatly built inside wall cavities. These “nest bricks” should be added typically in small clusters of two to four to gables of houses, as swifts prefer to nest close to one another.

Everyone can help swifts this summer by adding sightings of the birds nesting or flying around roofs to the RSPB’s Swift Survey
Data gathered in the survey are used to show which sites are most important for swifts.

There’s also an opportunity to get out and enjoy the swifts that have made it back this year and learn how to help boost their numbers during Swift Awareness Week, from Saturday 22 to Sunday 30 June.

This will highlight the plight of this iconic bird and show how everyone can help by, for example putting up swift nest boxes and gardening for wildlife. Over 70 local events have been organised during the week so far, from the south coast to the north of Scotland. Further details of each event can be found on the Action for Swifts website: https://actionforswifts.blogspot.com/p/2019-swift-awareness-week.html