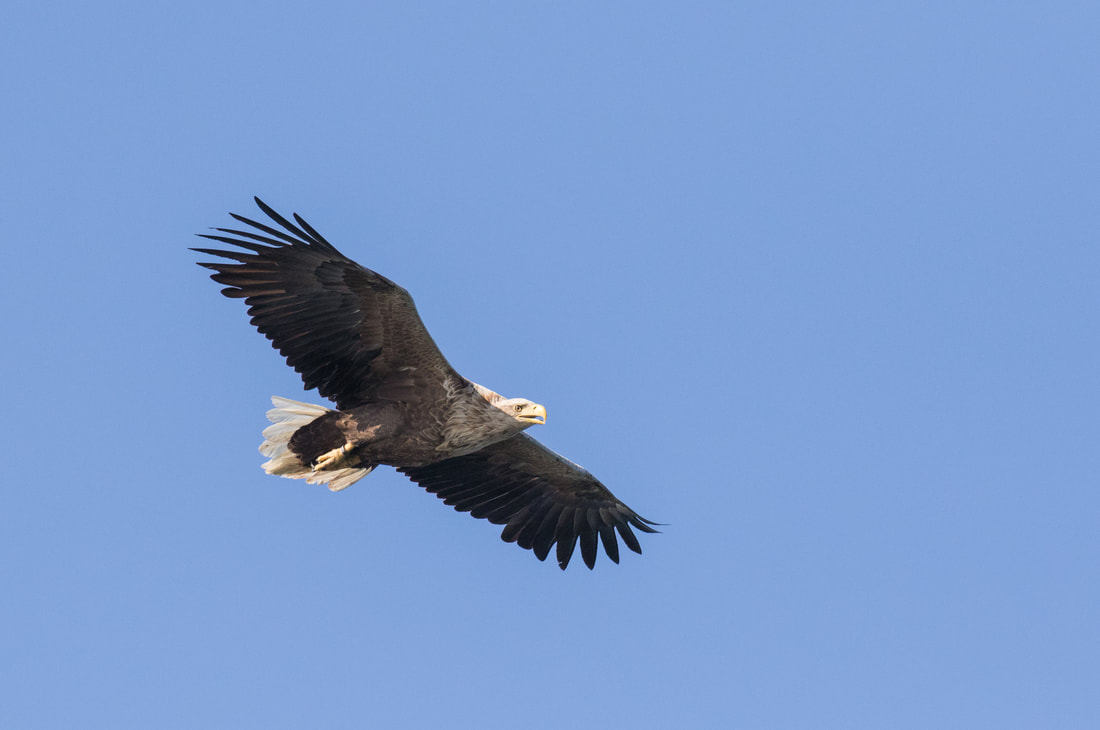 White-tailed eagle in flight by Liz Cutting
​A ring that is fitted to a White-tailed Eagle nestling that fledged in the Highland region of Scotland in 1996, has allowed the individual to be identified in the field as an adult bird in 2020, making it the oldest known bird of this species in Britain and Ireland, according to the British Trust for Ornithology’s (BTO) latest ringing report.

​In contrast, with a wingspan of just 18cm, the Chiffchaff, a type of warbler, is among the smallest of our breeding birds. The species has a typical lifespan of around two years but an individual ringed at Rutland Water in July 2009 has become the oldest known Chiffchaff in Britain and Ireland. It was recaptured 10 years, 10 months and 27 days after the first encounter, since when it  must have clocked up around 10,000 miles commuting annually between its breeding site in Rutland and its wintering grounds in Iberia or Northern Africa.

Lee Barber, Ringing & Nest Recording Surveys Organiser at BTO, noted...
"930,088 birds were ringed by our 3,000 highly trained, licensed volunteers in 2020, a slightly lower total than normal due to the restrictions imposed as a result of Covid 19 The most commonly encountered species were Blue Tit, with 118,771 individuals ringed, Blackcap (66,799), Goldfinch (56,742), Great Tit (54,405) and Chiffchaff (46,001). The large numbers of these species ringed allow us to compare how they are faring in different regions of Britain and Ireland, and in different habitats.”

BTO Researcher Rob Robinson is one of the scientists who analyses the huge dataset generated by the efforts of these volunteers.
​"By re-encountering these birds, either through reading of rings in the field or through recapture, researchers can determine whether survival rates are increasing or decreasing. These re-encounters of individual birds help improve our understanding of their movements, identifying where young birds settle to breed for the first time and how  pressures such as climate and land-use change, drive population declines. For example, recent BTO analyses based on the 15,000 curlew that have been ringed have shown that survival of adult birds is high, and that action to improve conditions for raising chicks is required."