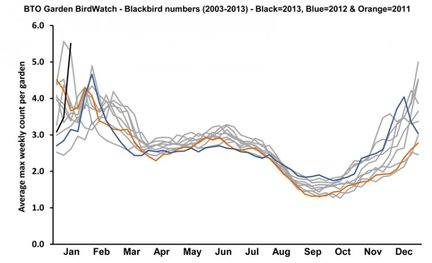 Participants in the British Trust for Ornithology's (BTO) weekly Garden BirdWatch survey have revealed just how big an impact the recent spell of snowy weather has had on our feathered friends. Taking just one familiar species, the Blackbird, as an example, these ‘Citizen Scientists’ have shown that the number of Blackbirds visiting gardens in mid-January was the second highest in a decade.

To provide a flavour of how January's snowfall has affected our birds BTO researchers have looked at the records of Blackbirds submitted from across the country. The Blackbird is a common and familiar garden species, whose breeding population is supplemented in winter by the arrival of birds from elsewhere in Europe.

As Mike Toms, Head of Garden Ecology, explains:  “This winter, we saw the average numbers of Blackbirds increase throughout October and November before they suddenly fell away with the arrival of a mild and wet spell just before Christmas, bucking the normal pattern. The arrival of the cold weather and snow during the second two weeks of 2013 changed all this and we saw a sudden leap in the average numbers. In fact, for the week beginning 13th January, the average count (which was 5.51 individuals) is our second highest from a decade of recording. The snow that followed later that week may have driven even more Blackbirds into our gardens, something that we'll be able to report on after this 'count' week has ended and our observers can enter their records.”

He continued “Of course, it is not just Blackbirds that have increased their use of gardens because of the snow. We have seen similar patterns for many other species, live results for which can be viewed on the BTO Garden BirdWatch website. If it remains cold then we predict a busy weekend for the RSPB’s Big Garden BirdWatch.”

As more of the white stuff hits the UK this week, it will be very interesting to see the continued results from this project.