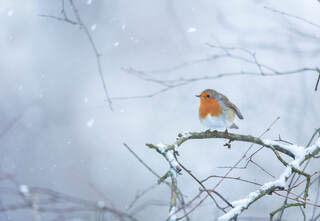 Robin in snowy woods by Ben Andrew (rspb-images.com)
​There’s so much to love about a robin. They’re easy to spot with their handsome red breasts, they’re people-friendly and they provide us with beautiful birdsong pretty much all year round. No wonder they’re the UK’s favourite bird, says the RSPB.

And Christmas is the time we really get to celebrate them. Stories about their association with the season go back in Christianity as far as the birth of Jesus, when a robin reportedly got its red chest from a spark as it fanned a fire to keep the baby warm. It became popular on Christmas cards in the Victorian era, often associated with the red uniforms of the posties who delivered them, who in turn were called ‘robins’.

They’ve been with us for centuries, with mentions of them dating back to Anglo-Saxon times. Historically, they’re woodland birds, who would follow large mammals such as wild boar around, knowing that their steps and digging about in the dirt would uncover worms and insects for them to eat.

They treat us in much the same way! They’re often called the ‘gardener’s friend’ as they’ll perch close by whilst you work, realising you are doing the heavy lifting for them!
​
Here’s some more facts about these festive favourites:
​
You can find out more on a number of RSPB reserves this festive season as they are running special robin-themed trails following the release of Aardman’s delightful Robin Robin film on Netflix.
OTHER POPULAR STORIES TO READ: