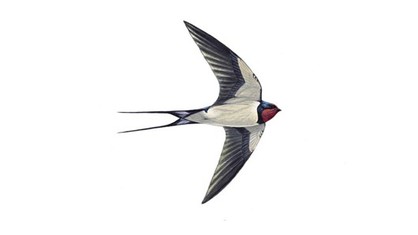 Swallow, Image: RSPB.org.uk
Birding24/7 have been looking at a few 'choice' birds recenltly, and this week we've been checking passports in the UK departure lounge of the British swallow (Hirundo rustica) as the species depart to spend the winter in Africa south of the Sahara, in Arabia and in the Indian sub-continent.

Migration is often not as obvious in the autumn as it is in spring with summer visitors ‘disappearing' gradually, often without notice - slipping quietly out the UK back door. Thus, recording the departure dates of migrants is often considered more difficult than noting arrival dates.

Our winter visitors tend to arrive over a longer time period and are generally aren't in such a rush as spring migrants; the urgency of the breeding season is not there. Autumn migration is a really exciting time though, and with a bit of patience and some time in the field with your trusty binoculars, you can be rewarded with viewings such as the swallow's departure and the dispersal of raptors to their wintering grounds.

As previously mentioned - British swallows spend their winter in South Africa. Their more common route takes them through western France, across the Pyrenees, down eastern Spain into Morocco, and across the Sahara. Some birds follow the west coast of Africa avoiding the Sahara, and other European swallows travel further east and down the Nile Valley. These small birds with dark, glossy-blue backs, red throats, pale underparts and long tail streamers are extremely agile in flight and spend most of their time on the wing.

Unlike a modern-day endurance athlete's diet before a big race, you won't find the swallow carb-loading before covering 200 miles a day at average speeds of 17-22 miles per hour, far from it. Swallows actually put on very little weight before setting off, migrating by day at low altitudes and finding their sustenance on the way. However, this strategy does lead to problems... and despite accumulating some fat reserves before crossing large areas such as the Sahara Desert, the lack of essential nutrients from food mean the birds are vulnerable to starvation during these crossings. Its a hazardous time and many birds will die from said starvation, exhaustion and during violent storms.

Swallow numbers in the UK have fluctuated vastly over the last 30 years with pronounced regional variation in trends. The species is now amber listed due to population declines across Europe.

For many birders, autumn brings with it excitement and anticipation. If the sometimes strong winds blow from the east during October there will be a good arrival of far eastern species and birders in Ireland and the west of Britain will be closely following the weather maps looking for fast moving depressions moving across the Atlantic that could bring an arrival of American vagrants like Red-eyed Vireo, Buff-breasted Sandpipers and rare thrushes and warblers.

Keep an eye out for more in our 'in focus' bird series soon.
OTHER POPULAR STORIES TO READ: